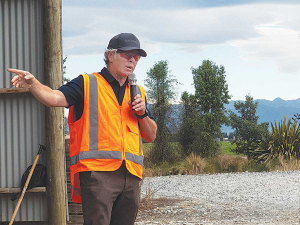 The Lincoln University Demonstration Dairy Farm (LUDF) is looking to cut staff numbers as it adopts a new “lean” system in an effort to cut costs and maintain its place as a leader of the industry.

“We’ve lost a bit of relevance in the industry. We want to be in the top 20% of profitability and we’re not,” says Ashburton farm consultant Jeremy Savage.

Savage, the acting head of the South Island Dairying Development Centre, the partnership of Lincoln University and other industry bodies which runs LUDF, told Dairy News that because it has been focused on operational excellence it had been doing “100% of the job on 100% effort.” The challenge now was to see if it could achieve 95% of the result with 50% of the effort.

LUDF recently held a summer/autumn focus day at the Balmaghie Farm near Ashburton. Owned by Mark and Pennie Saunders and run by contract milker Joseph Williams, Balmaghie was chosen partly because of its highly efficient operation.

“He’s doing 500 kilos of milk a cow with absolutely minimal supplement. He turns the grain feeder off, which most people can’t do,” said Savage.

Speaking to the large turnout at the Focus Day, Savage said LUDF manager Peter Hancox’s “fantastic” pasture management had proven the concept of very high per cow production on a grass-based system, but at the cost of running multiple herds and having extra staff.

The proposed new lean system would entail just three staff (including manager) instead of four, on a 5+2 roster, with a calf rearer/relief milker used in summer. The farm has already moved to a single herd with a simpler grazing programme.

It will seek external support to help with the extra workloads of a demonstration farm around extension, visitors and data-gathering.

It would also look to save energy around such things as tractor hours.

Part of the problem was the age of the farm and its equipment. A shed power board had to be replaced last year at a cost of about $25,000.

“The challenge has been laid on us by our management group, our advisory group, to see if we can get a cost structure with a three in front of it.”

Savage said LUDF would look to technology to maintain health and safety especially at times when there is only one person on farm, and to ensure no compromise on animal health.

“So watch the space and we’ll keep you up to date with what works and what doesn’t.”

But reproduction rates and production were hit by a viral infection which went through the herd in late December. Symptoms suggested Infectious Bovine Rhinotracheitis (IBR) but that could not be confirmed by testing.
However, on a day when many speakers’ focus was on how the industry will work with the proposed national cap of 190kg/ha of applied nitrogen, Savage said LUDF was already there, with an average of 170.

“We do have a couple of paddocks which are nudging 190 so we’ll just pull the nitrogen back on those.

“It’s a big deal for farmers and it’s the first bit of legislation that has really dictated from central government how we can farm. Farmers aren’t used to that.”