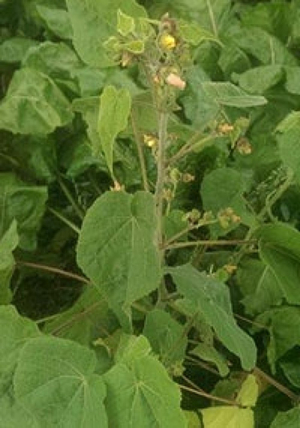  MPI says not all farmers took up its offer to tackle velvetleaf infestation on their farms.

The Ministry for Primary Industries is calling on farmers to be “Vigilant with a capital V” for velvetleaf infestation as the new growing season approaches.

MPI velvetleaf incident controller David Yard says a number of farmers who had velvetleaf on their properties last season took up MPI’s offer of helping them draw up management plans to handle the infestation, but quite a number did not.

“We are currently negotiating with regional councils to contact all the higher-risk premises to make sure that these individual farm management plans are drawn up then implemented. So we’re still very proactively working with farmers and regional councils to provide support to those that we know are contaminated.”

“Basically any farmer aware that they’ve had velvetleaf on their property need to be extremely cautious, even if they’ve identified it, and they need to implement good on-farm hygiene practises. And there’s plenty of advice on our website in terms of farm management plans.”

Yard said MPI was “extremely confident” that contaminated importation would not happen again.

“I think we can put everyone’s mind to rest that any new seed lines that come in this season will be free of velvetleaf. We’ve elucidated what the problem is, we’ve tightened up the import requirements [and] the contaminated seed lines themselves are banned from entry.”

In off-season MPI had visited all the relevant European authorities, made recommendation and tightened the import standards, Yard said.

“We have a much tighter control in place to stop further contamination coming in. So the problem is not new seed lines - it’s the seed lines that were planted last year.”

DLF Seeds and Science expects to be selling new season fodder beet seed for sowing from about mid-October. Managing director Tom Bruynel said the protocols around preparing and cleaning seed in the factory in Denmark had been made considerably tougher.

“We’re very confident about it because of everything that’s been done, right back to the paddocks and the weeding of the paddocks prior to harvesting the seed, that happened a couple of months ago.”

Bruynel said DLF was also doing its own internal testing - “vastly more” than MPI was doing – and had found no velvetleaf contamination.

However, Yard said MPI expected “quite a number” of new velvetleaf finds as stray seeds from plants which grew last season started to germinate around November and December.

Yard said MPI would not be repeating the intensive “search and destroy” programme it undertook in conjunction with other authorities last season, which was primarily aimed at the first two seed lines identified.

“Later on in the season we became aware of another four seed lines but it wasn’t possible given the timing to undertake a wider search and destroy programme so anyone who received this six seed lines remains at greater risk than the average farming population.”

Velvetleaf was identified on 252 properties but Yard said there was likely to be a significant number of farmers who, for whatever reason, missed it.

Because the fodder beet seed was imported in pelletised form it had been an arduous and expensive process testing it for velvetleaf seed. Each 5kg box contained 100,000 seeds which all had to be stripped and inspected by microscope.

“To put it into context the level of contamination was extremely low. In some cases it was as low as one seed per box,” he said.

“We’ve had to discover one seed in 100,000. But that one seed once it’s planted in the ground will produce one plant which is capable of producing 15,000 seeds, if they remain undetected this season.”

“The saving grace is that the seeds are not generally windborne so it’s quite likely you’ll get an area of a few square metres of velvetleaf fairly intensively growing which will make it easier to spot.”

Yard said suggested management plans and other advice was available on the MPI website. Risks to be aware of included seeds being spread by muddy equipment, or eaten and spread by stock. Stock should be held in quarantine areas after potentially eating any seeds, and only low-growing crops or pasture should be grown in suspect areas so the taller velvetleaf plants become easier to spot.

“It’s all about modifying farming practises and just being vigilant about what to look for.”