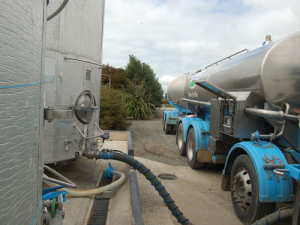 This reduction is highly unusual, the co-op says.

“Fonterra is continually assessing the ongoing impact on its contract book and future production plans, given that milk collections at the peak of this season will not recover and will flow into the balance of the season,” the co-op’s global dairy update for September says.

“Since then the continuing impact of materially wetter-than-normal spring weather in most regions has further reduced Fonterra’s milk volumes in NZ."

Daily milk volumes in the central and upper North Island were well down in early October.

North Island milk collection in September reached 110m kgMS, 5% behind September last season. Unfavourable weather continues to affect production in most dairying regions. High rainfall in October have made conditions difficult in many regions, most noticeably in the central region where daily production is down about 14% on last year.