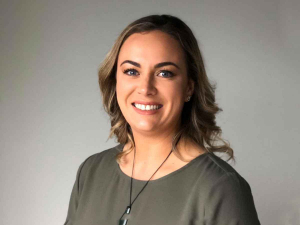 She told Dairy News that the morning after her win, she received a congratulatory text from a farming family. A nine-year old girl in the family said Campbell’s win had inspired her to become a dairy farmer.

“It felt great to read the text. My win proves that anything is achievable for a young girl if we put our heart and mind into it.”

Campbell was shocked with her win and delivered a teary acceptance speech from her home. Due to Covid-19, there was no awards dinner. Instead a virtual awards ceremony was hosted by Julia Jones. The winner was announced by Fonterra Farm Source head Richard Allen.

Campbell says it was a strange experience.

“There was no glitz and glamour, no getting on stage to accept the award, I was sitting there wearing a dress and woollen socks,” she says.

Campbell says when Covid-19 restrictions lift, she will make a point of personally meeting and thanking Allen and Farm Source for their sponsorship.

She also had special thanks for the two other finalists: Auckland based microbiologist and bio chemist Natasha Maguire and West Coast dairy farmer Heather McKay.

“It’s a pretty unique situation. I haven’t met them, we just exchanged emails, but they are incredible women.”

“There are many hats we put on: we do it because we love it,” she says.

She says the Dairy Women’s Network brings women together where they can share stories and inspire each other.

“Ash-Leigh exudes energy and passion for the dairy industry and has actively sought opportunities to both contribute and grow in an industry she loves,” Gibb said.

As the farming technical farm manager for Ngai Tahu, Campbell has been working for the South Island Maori iwi farming operation for over three years.

In her current role she is responsible for assisting with the management and performance of eight dairy and dairy support farms that includes 8000 cows.

After leaving high school she studied at Lincoln University doing diplomas in agriculture and farm management and a degree in commerce majoring in agriculture.

It was during this time she had her first taste of the Dairy Women’s Network, becoming a network regional leader and the driving force behind the DWN Lincoln group which has now merged into Selwyn.

She also assists with operational and environmental performance (audit and compliance), analytical projects and the implementation and improvement of sustainable farming practices.

A series of workshops on putting people first on dairy farms get underway next week.