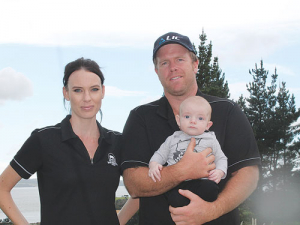 Dan and Gina Duncan with 3-month old Brock on the farm.

The winners of the 2018 NZ Dairy Industry Awards, Dan and Gina Duncan, are overwhelmingly positive about the industry.

They say the way dairy farmers interact with each other is fantastic.

“Look at the discussion groups and how willing people are to share what they are doing,” Dan told Dairy News.

Gina says DairyNZ and Federated Farmers put in the hard yards with central and regional government “always on our side fighting for what is best for the industry”.

The Duncans are 50:50 sharemilkers for the Pouto Topu A Trust milking 1020 cows on the 460ha Pouto property.

Both Dan and Gina, aged 32, hold Bachelor of Applied Sciences degrees with majors in rural valuation and management; Dan holds a double major including agriculture.

He grew up on Waikato dairy farms.

The kiwifruit vine disease Psa propelled them into the dairy industry much sooner than expected. They were both working as valuers in Tauranga when Psa hit in late 2010.

Kiwifruit was a huge chunk of Dan’s work and no one was buying or selling. So when he saw the unwelcome prospect of having to work in town, he brought forward by several years his plan to go dairy farming.

It was a crossroads, says Gina. “We were discussing it and I said ‘if you are going to make a change it should be now’. I didn’t realise it would be my change too. But that is all right.”

Dan got his first herd manager job in Matamata in the 2012-13 season.

“We knew we wanted to get a 50/50 position quickly because that is where you pick up a lot of the skills and growth for achieving farm ownership,” says Gina.

They managed to get a contract milking job in Tokoroa for 620 cows the following year.

“That was a pretty big step considering he had only been in the industry for a year,” says Gina. “We were there for three years but with 50/50 being in our mind we came up here for this job. This is our second season.”

Gina grew up in an urban environment in Nelson and when Dan got his first dairy job she kept on with her work in urban valuing.

When he decided to go farming Gina says she wasn’t really aware that it was a two-player job. When Dan went for the contract milking job and said she should be coming to the interview as well, she asked herself ‘why am I coming?’

“That’s when it fell into place pretty quickly that it is both of us going into this together. From then on I was rearing the calves and trying to do as much of the business side as possible.”

When they had Lachie in 2014 she took a massive step back from valuing although she still does some at home now. She got much more involved on the farm and did an AI course with LIC and “really tried to integrate myself more into the business”.

She now does about 25% of their AI at the Pouto farm.

They say they were lucky with their move to sharemilking in Pouto, timing was right in terms of rising milk prices but still quite low cow values.

Dan says this season they peak-milked 1020 cows on two farms owned by the Pouto Topu A trust. They have an adjoining runoff where they run the young stock. They run a system 2 operation.

“We try to prepare the best we can for dry summers; that’s our main challenge here.

“We calve early, use summer crops and use once a day milkdingas a tool. We have a small amount of bought-in feed. We run a pretty simple system.”

The judges said Dan and Gina Duncan can be summed up in three words: passionate, professional and committed.

“They are a friendly, outgoing couple who are working on an exceptionally challenging farm,” the judges say.

“They epitomise living the dream. They left secure jobs as registered valuers and made the career change to dairy farming, and they’re excelling at it. They’re the complete package.”

Share Farmer head judge Kevin McKinley says nothing has come easy for them; they’ve had to work hard.

“When they began their career they sought out employers whom they thought would be good mentors and role models for them. They’ve looked for opportunities where people are considered important,” he says.

Blown away by snow

The Duncans were ‘blown away’ by the NZ national dairy awards night and meeting up with all the finalists for four days in Invercargill beforehand.

Gina says on the awards night they were led in by huskies and a sled with confetti falling on them.

“It was incredible, amazing – they did a flawless job of the night.”

Entering the awards launched their strategic plan to open doors for the future, and evolved into the realisation of what a huge honour it is to take away the title.

Dan says it is easy to get absorbed in the day-to-day running of the farm.  “We thought entering the awards was a good way to slow down and analyse everything we are doing on another level. That was a big thing we wanted to do – force ourselves to do that analysis so as to know exactly where we sat. It definitely served its purpose, the amount of detail we had to go through.”

Dan entered Dairy Trainee of the Year in 2012 in his first season and was runner-up in Waikato. He entered Manager of the Year when they were contract milking and says that was a “balls-up” as they did not prepare enough.

“We explained how we were farming but we didn’t really back it up with the evidence.”

They did not achieve a placing, but still it was helpful in that they dug into their business again and worked out what they were doing, and set goals.

This time their goal was to win the regional award and after that to get a merit award at the finals.

“We never thought we could actually win the nationals,” says Dan.

The farms are on the isolated Pouto peninsula on the northern side of the Kaipara Harbour, with the nearest town, Dargaville, a 50-minute drive away.

Dan Duncan says the isolation is not an issue for the two of them, but it takes effort to ensure their children will get the socialisation they need. That requires four hours driving three times a week to take Lachie to daycare in Dargaville.

They also started a play group at the local school.

Isolation also requires good organisation: they need to be ready when contractors come.

“We do a lot of the mulching, drilling, spraying and fertiliser spreading ourselves because of that isolation -- having a bit more control over when things are done because it can be tough to get contractors on time down here” says Gina.

In their first season at Pouto they hosted a discussion group.

“The farm hadn’t been opened up to a discussion group for quite a while. We had a real good turnout with people interested in what was going on and, of course, who the new people were,” says Dan. “It was a good way to get some ideas of what people think we should be doing to help improve the farm.”

The DairyNZ resources are also “bloody good in terms of support”.

They also got Northern Regional Council to do a farm environment plan which was helpful in setting priorities. Though all the property was fenced, some of it was old, so that helped prioritise that work, which has now all been done.

“We have always believed that environmental compliance should be the bare minimum,” says Gina.

Farm ownership is the long term goal but the current goal is to retain a 50/50 job.

“We can’t see that part of our business changing in the next 5-10 years but we do want to start looking at adding an equity partnership on the side or something like that,” he says.

Changes have been announced to the New Zealand Dairy Industry Awards programme.

One of New Zealand dairy awards' key national sponsors, Westpac is pulling out this month.