Women: put on your overalls with pride 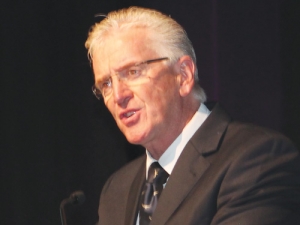 The role women play in the dairy industry is enormous and women are truly stepping up and demonstrating leadership.

This is the message from Shane McManaway, Allflex Australasia general manager.

He didn't see that in other agri sectors, he told the Dairy Womens Network annual conference in Hamilton last week. Allflex was a major conference sponsor.

McManaway referred to the "cool winds" sweeping across the country in terms of the dairy prices. In the middle of the night when farming couples listen to whether the dairy price has gone up or down, it will usually be the women who say "we'll be ok. Let's get up in the morning and get on with the job".

"[You're] the backbone of the country -- so well done," McManaway said to the conference attendees.

Agriculture too is the backbone of this country and has many good stories to tell. However he had seen mostly negative stories in mainstream newspapers over the past 12 months.

"It makes me wild," he says. "But we've got a part to play in changing that."

In 2014 he launched a campaign in Australia called Proud to be a Farmer. They went on television and every soapbox they could find throughout Australia to tell urban people how important farming was in the fabric of that country.

They then launched it in 2015 in New Zealand and it has been a tremendous success. "I'm getting to talk to a lot of people around NZ on this pride we have."

He says he has read that when Richie McCaw got his first All Blacks jersey he took it out of the cellophane and buried his face in it for 45 minutes, absorbing the pride he would have in that journey and what that meant to him.

"As farmers, when we put on our overalls in the morning or take them out of the cellophane for the first time, [we should] 'bury' our faces in our overalls and put on pride," he said.

McManaway has visited four countries, including China and Israel, speaking at two major events this year about Proud to be a Farmer.

"The stories I told came from NZ. Do you know, when people start to get that pride in their belly and get cracking, it's infectious."

Farmers should be proud of what they are doing and get on every soapbox they can. "Let's try to narrow the gap that exists today between urban and the rural."

The problem we have now is not of Fonterra's making, he says. "I'm not here to give Fonterra a plug... this is a global issue."

From his visit to China he sees that we should stick to the game plan, understand where we are going, who we are and how we are going to get there "and we will be ok".

It is tough out there, it has been a long couple of years and while the light at the end of the tunnel is flickering it still feels a long way off, says Dairy Womens Network chair Justine Kidd.

As much as any time in history, the dairy industry needs to come together and Unite to Succeed, she said, referring to the theme of the DWN conference held at Claudelands in Hamilton last week.

Kidd says in 1923 the dairy accord set the scene for the proud industry it now is. This was the coming together of 400 cooperatives, the first of which started in Otago in 1871.

"Here we are 145 years later at the 2016 Allflex Dairy Womens Network Conference with the theme United to Succeed."

She says the DWN conference team worked tirelessly and creatively to provide a conference that reflects today's reality. They shortened the format and made tough decisions to pull together a conference creating an opportunity to learn, grow and build existing and new friendships and contacts.

She acknowledged the team's effort in ensuring "the show must go on" in difficult economic times. Making the conference happen had been a huge undertaking.