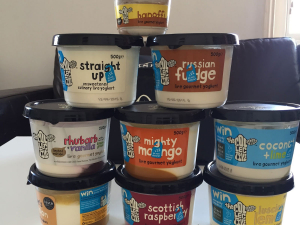 A company whose motto is “great dairy…no bull” has been slapped with a $476,000 fine for repeatedly failing to report positive listeria results from its factory.

Epicurean Dairy Ltd which makes The Collective brand yoghurt and ‘suckies’ marketed to children - and the company’s former general manager Angus Allan, pleaded guilty to a total of ten charges of failing to report positive environmental listeria results when they appeared in the Waitakere District Court today.

According to The Collective Yoghurt’s website, the company was started by “two clever entrepreneurial chefs, Angus Allan and Ofer Shenhav”.

It says their quest was “simple... create an extraordinary yoghurt with an unbeatable taste”.

However, the Ministry for Primary Industries says it launched a probe after investigators were given credible information about the West Auckland-based company from a confidential informant.

MPI says it was a complex and long running investigation.

MPI’s director of compliance Gary Orr says that from 2012 to 2016, the company deliberately and repeatedly failed to report positive listeria results that were taken from a floor at the company’s factory in Avondale. During this period, the company also falsified official related records.

He says a total of 190 positive listeria results went unreported during this time.

“This was serious, systematic and sustained deception – there’s no other way to describe it,” says Orr.

“The company was regularly audited to ensure its manufacturing environment was in accordance with regulatory requirements but it lied about what the true situation was.

“The part of the factory that was producing positive environmental listeria results was an area where the most stringent food safety requirements applied. It was where yogurt and cheese was being produced for human consumption.

“It’s clear that if the company had reported the positive results, there would’ve been significant costs associated with remedying the problem, which included replacing a cracked and unhygienic floor, as well as a halt to production due to the work that needed to be done.

Both of the former directors who have been convicted and fined were fully aware of and party to the deception involved.

Orr says there is no excuse for this type of blatant and sustained offending.

“When offending of this nature is detected, we will hold those responsible for it to account.”

Proactive and well-prepared farmers and lenders stand to gain from the introduction of the Farm Debt Mediation scheme, according to Scott Abel and Bridie McKinnon from law firm Buddle Findlay.

A Waikato farming company has been slapped with a $63,000 fine for unlawful discharging of farm effluent.

Waharoa residents are looking forward to getting on with their lives without “unwanted intrusion” from a nearby milk processing plant.