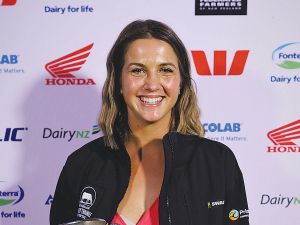 Dayna Rowe won the 2021 Bay of Plenty Dairy Trainee of the Year award and now manages her parents' farm.

With a third of dairy farms seeking to fill vacancies ahead of calving season, Kiwis are being encouraged to give dairy farming a chance.

And giving dairy farming a chance is something 2021 Bay of Plenty Dairy Trainee of the Year Dayna Rowe knows a little about.

“Initially, I didn’t quite know if I liked it or anything,” the 23-year-old says of her start in the industry.

Rowe started out as a farm assistant back in 2017, now she’s farm manager on her parents’ Bay of Plenty farm, managing a team of four.

“What attracts me to it [the industry] now is the opportunities you get to create whatever pathways you want out of it because the industry is so broad,” she told Dairy News.

“I think when I went into it, I thought you just had to be a farmer and a lot of people don’t really know what that is or what that means, but once you get into the industry and start working in it you realise that there’s so many different aspects of farming, animal health, all that sort of thing and you can decide what you’re interested in and what pathway you want to go down and hone into.”

She says it’s an industry that’s flexible in how it allows its workers to cater to their own interests and run their own lifestyle.

Not so easy is the sexism Rowe says she’s experienced as a young woman in the industry.

“I think initially, just being a young female and trying to start my progression… I started as a farm assistant in 2017 and being ambitious and wanting to try and progress, I received quite a lot more pushback for my ambitions than males in my similar position just because it is a historically male-dominated industry and not everyone was taking me seriously.”

She says that when she entered last year’s Dairy Industry Awards, she didn’t enter for the same reasons other entrants to, like adding a commendation to their CVs or opening doors for jobs.

Rowe says that it’s become her biggest challenge and her greatest reward because she’s gotten herself far and fast.

“There is a silver lining to it.”

Rowe’s advice for other young women in the industry is simple: don’t sit back, don’t be afraid to challenge the processes.

“Find other women in the industry because we’re out there and we’re all really willing to support each other, or men there are many men in this industry.

“Until I hired women, I pretty much only worked with men and they really built me up to be able to be in the position I’m in.”

“Just communicate with people and keep pushing and know that you’re doing your best.”