A Claas of its own 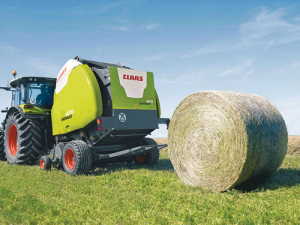 Claas has unveiled its two-model Variant 400 series round balers, due for release in New Zealand and Australia in 2017.

Improvements to the intake, crop flow, wrapping and maintenance systems are said to make the machines more powerful, reliable and easier to use when harvesting all kinds of crops.

A new star rotor structure turns through 360 degrees instead of the current 180 degrees. In the Roto-Cut version this equates to the 14 knives achieving 6000 cuts per minute, and ensures material is even across the width of the bale chamber, helping to create uniformly shaped bales – ideal when baling narrow, uneven swathes.

A dual roller crop press, already in use on Jaguar harvesters and Quadrant balers, is now also available for the pick-up, and can be adjusted for varying crops without the need for tools. It ensures a more uniform and faster crop flow, allowing higher operating speeds.

The Pro specification includes an extra-large (2.35m) pick-up width with hydro-pneumatic suspension, a moveable cutting floor which automatically drops if there is a risk of blockage, and oscillating castor guide wheels that fold and reduce transport width.

The 400 series has edge-to-edge net wrapping as standard and modifications to the intake chute where a plate assists net or twine into the chamber to promote instant start for the tying process. When net is being used, a new spiral roller ensures netting stretches from one corner of the bale to the other, and an optional wider 1.3m netting trough can also help lay netting over the edges of the bale, creating a rounded edge.

Further improvements include a reinforced front frame for low-wear belt guidance, a wide lubricating brush that coats all chains with oil, and a redesigned tailgate pivot which allows bale discharge in no more than six seconds.

CLAAS has extended the versatility, productivity and user comfort of its CARGOS dual purpose transport wagons with the addition of new steering options, increased capacity and an ISOBUS terminal.