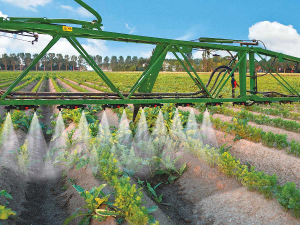 AMAZONE has raised the bar in the area of partial width spraying technology.

AmaSelect is an electronic multi-nozzle control system that automatically selects and activates the best nozzle according to the desired application rate and forward speed. Positioned at 50 cm intervals along the boom, each ‘pod’ comprises four individually controlled nozzles.

In use, the operator enters the optimum pressure range for each nozzle into the ISOBUS operator terminal. Once the optimum pressure range of a nozzle is reached, AmaSelect automatically switches over to a smaller or bigger nozzle or adds a second nozzle to the spray circuit. Standard fittings include LED lighting on each nozzle and the DUS Pro high- pressure recirculation system. An optional GPS-Switch function switches off individual nozzles in 50 cm part-width sections as the unit approaches headlines and other obstacles. Alternatively, an optional intermediate kit enables nozzles to be fitted at 25 cm intervals for high volume application or if target heights are less than 50 cm.

CLAAS Harvest Centre product manager for AMAZONE, Steve Gorman, says the technology can significantly reduce spraying costs. “By itself, the automatic control of individual nozzles can reduce chemical costs by up to five percent ten percent when used in combination with AMAZONE GPS-Switch section control.”

The new band spraying function enables any sprayer equipped with AmaSelect to be converted from whole-boom application to row-specific band spraying at the press of a button.

In operation, the AmaSelect Row function utilises special SpotFan 40-03 nozzles that deliver 100% of the crop protection agent across a 50 cm wide spray cone, with a 40-degree spray angle eliminating overlap. An extension kit is also offered to shift the positions of two nozzles in each pod to cater for 25 cm and 75 cm row spacing.

“Over-application may damage crops, while under-application may result in incomplete weed, insect or disease control. Either way, both can lead to loss of yield, which is counterproductive to spraying in the first instance.”

CurveControl uses sensors to determine the curve radius, from where the AmaSelect system then automatically determines the correct nozzle and the application rate for each section across the boom.