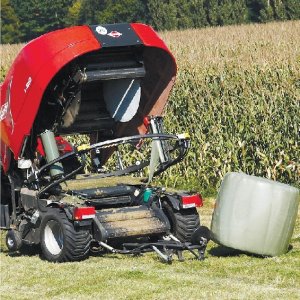 ‘ONE MAN easy’ summarises the running of a new compact baler-wrapper from Kuhn.

The company says its i-BIO baler-wrapper combination is a “light-weight, efficient and high-speed one-man” machine.

It weighs no more than 3.5 tonnes (unloaded), is “manoeuvrable and suitable for smaller tractors and ideal for small paddocks with narrow access and hilly areas.”

Isobus-compatible and using Kuhn’s patented IntelliWrap bale wrapping facility and new forage intake system (integral to the machine), the i-BIO requires no bale transfer during the making/wrapping process. Instead the upper part of the bale chamber opens after bale formation and binding, allowing pre-stretchers (fitted on a crown gear) to carry out the wrapping. The machine has a 2.3m wide pick-up. The IntelliWrap system uses electronics and hydraulics to gain flexibility and control during wrapping. The system allows control of the percentage film overlap and enables the number of film layers to be set simply by pressing a terminal key. The operator gets a good view, from the tractor seat, of all net binding, wrapping and discharge operations, without need for a camera.