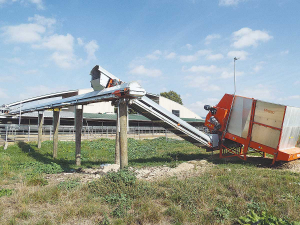 The Combox takes the form of a hopper with a moving floor, filled by a front-end loader.

The properties carry around 420 big-framed Friesians, with a sprinkling of Jersey crosses and up to 100 beef animals. Daniel Harris is the third generation to run the farm following the family's arrival in 1949.

Keen to offer home grown supplements during the season, the operation had tried in-paddock feeding but were disappointed by high levels of wastage and baulked at the cost of setting up a feed-pad for over 400 animals.

This led to the challenge of feeding in the milking shed, with the understanding that while there were solutions for delivering pellets or meal, there did not appear to be anything suitable for the automated feeding of maize silage.

Looking to incorporate a system into the 40-aside herringbone meant that a conveyor based system was the only option, so the operation were pleased when Richard Morgan, a consultant for ACR Agri, campe up with a solution from Canadian manufacturer Valmetal, who had extensive experience of such layouts in the home country and throughout Europe.

Centred around a 450mm wide, textured polyester belt with a PVC coating, the system features a heavy-duty industrial gearbox driveline and a feeder box that is loaded out of the maize silage clamps, situated about 50 metres from the milking shed. The Combox takes the form of a hopper with a moving floor, filled by a front-end loader, moving the load to twin horizontal beaters that remove any lumps, before it passes to the conveyor system.

Daniel Harris says installing the system into the milking shed was very much “a trial and error procedure, taking into consideration a low roof height and the need to move a few vacuum and water lines”.

Now in its second season, the system works well, typically delivering around 2.5kg DM per head, which is easily consumed during the 8 to 10 minutes the animals are typically in the milking shed.

Feed is metered from the feeder hopper onto the conveyor lines that run overhead each side of cows, with a travelling sweeper arm pushing off the feed, which falls by gravity into the trough.

Those troughs run the length of the shed, modified with higher backs to avoid any spillage.

“The system is particularly useful for supplementing the grass throughout the year, especially so at peak times like post-calving or in late summer/early autumn when growth stops, as we dry out quite quickly,” says Harris.

“We also like the fact that as well as our own feed, we can incorporate minerals and if necessary, deliver bought-in feeds like PKE or soya meal, should we need arise.”

Although a little coy about the cost of the system, Harris notes that the investment is substantially less than a new feedpad for the herd, with the only item on the “wishlist” for the future being a weigh system, to monitor intakes more accurately.

“The system is easy to use, with a clever yet intuitive overload protection function, alongside being easy to maintain with a few banks of grease nipples and the occasional re-alignment tweak for the belts,” Harris says.