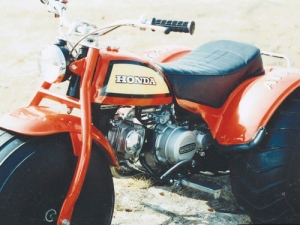 You may be old enough to remember the movie: the year 1971, and Sean Connery aka James Bond is chased by security guards on red three-wheel motorbikes with huge knobbly tyres.

Space-age, not quite, but Honda Japan’s answer to a request from the Honda USA sales team for an off-road vehicle.

In fact it had all happened a year earlier, in 1970, when the ATC 90 was born and offered to the US public at US$595. The bike was crude to say the least: an 87cc engine, a rigid rear axle and suspension effect made possible only by those huge balloon tyres. But it allowed the Yanks to let off steam in the vast tracts of desert to the east of Los Angeles.

What the sales teams in the US and the designers in Japan probably didn’t realise was that the basic-spec trike they produced became the catalyst for an industry segment that grew and grew, evolving into a sector whose technology today rivals the car industry in sophistication. Honda had that market to itself for many years, with Yamaha taking until 1979 to launch the YT 125, Kawasaki in 1981 with the KTL 200, and Suzuki bringing up the rear with the ALT 125 in 1982.

About then it dawned on farmers that this style of vehicle might have a place on the farm, particularly in the winter when it could travel over wet ground and do much less damage than a conventional farm tractor. With this discovery the manufacturers were quick to add a fourth wheel, and so began the birth of the ‘quad’.

The industry ballooned, and new names such as Polaris Industries and Artic Cat eventually joined the fray with the ‘big four’. Over the years the chase seemed to be for larger engine capacities, better suspension and better racks and accessories to extend the range of tasks these machines could carry out.

In 1988 the quad consolidated its position, the makers of three-wheelers voluntarily ceasing production due to increasing concerns over the rising number of serious injuries and fatalities these types of machines seemed to be causing.

But four-wheelers also had a major flaw in that they required, and still do require, a lot of operator input. While it appears you can throw a leg over, hit the throttle and go, a problem arises in cornering, where body weight needs to be shifted left to right or front to rear to help change direction. Hence the large seat found on quads – not for passengers and definitely not for grandchildren.

As the quad became the ‘Swiss army knife’ onfarm it was inevitable that what was initially crafted as a recreational vehicle would be asked to do too much. As the loads on the quads’ racks increased, someone at Kawasaki saw the need for a proper load platform, and the Mule (multi-use light equipment) was born in 1988, followed by the Yamaha Pro-Hauler in 1989.

Over the ensuing years production rocketed, driven by recreational sales in the US, and sales to agriculture also becoming more important. In the 2003 season sales in the US alone hit the 1,000,000 mark.

The evolution rolls on, with farmers and landowners now offered an amazing choice. The rise in sales of side-by-side vehicles over the last five years has been dramatic, with all manufacturers in the game. Their rise in popularity has probably been at the expense of the traditional ‘quad’.

It’s important to choose the best vehicle for the job. Consider safety as legislation becomes more prevalent, the number of people to be carried, and the load or task.

2-wheel farm bikes
Good for getting about easily to inspect the farm and livestock; good for mustering cattle or sheep and maintenance work; limited ability to carry any loads; suit most ground conditions; require an experienced rider; low cost.

Quads
Good for inspecting farm and livestock; good for mustering stock; but care needed for rapid changes of direction because of rollover risk; need high operator input and skill; able to carry small loads on dedicated
racks; able to tow small, purpose-designed trailers;  not good for sealed roads and demand care in difficult terrain; should not be used to carry passengers; medium to high cost.

A step up for two-wheeler fans

Replacing the well known XR 125, the new Honda XR 150L is a step up for those preferring two wheel transport on the farm or between properties, as the machine is road registerable and LAMS approved.

Two-wheeler gives the best of both worlds

Regardless of the debate about quads versus side x sides, two-wheelers remain crucial to many livestock farmers.