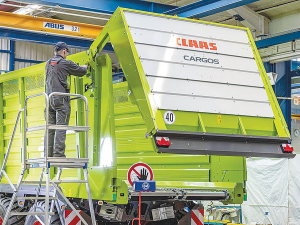 It’s end of the line for Cargos loader wagons.

The company reports that although global sales of such wagons are on the decline, the format still fulfils a niche market in some regions.

Produced at the company’s Bad Salgau facility, Cargos’ demise will free up assembly space to make the increasingly popular Orbis 900 row-independent headers that are fitted to forage harvesters, primarily for harvesting maize.

Alongside an upgrade to the existing 5,000 square metre assembly hall, further upgrades costing €40 million will help improve production logistics and assembly optimisation over the next few years. The company also reports there is an ongoing plan to expand, modernise and professionalise its mower, tedder, swather and baler ranges, also manufactured at Bad Salgau. Parts and service support for existing Cargos operating around the globe will continue well into the future.

Industry sources suggest the move will allow existing manufacturers the opportunity to achieve a higher market share, while at the same time commenting that although sales have been in decline for many years, at present, the market remains relatively static.