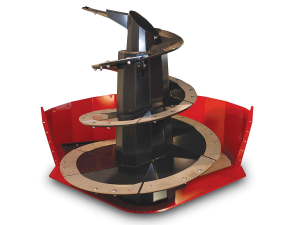 The HD transmission line is offered as an option on the VM 38 and VM 45 machines with triple augers.

It consists of a robustly made gearbox and PTO shaft that are designed for continuous operation under heavy load. The gearbox has an oil cooling system that ensures a constant and optimal operating temperature. The solution includes a gear pump and an oil filter.

The HD transmission line withstands farmers’ intensive use of such machines: it is not unusual for a diet mixer to have to produce six-seven mixes per day and to cope with longer mixing times.  Growing heavy loads were also behind the company’s Mix+ -- in essence a wear part concept with replaceable wear parts for the front edges of mixer augers.

Diet mixers that go the distance

Norwood has imported the biggest tractor yet seen in New Zealand -- a New Holland T9.670 scraper.

Norwood has quit importing Lemken farm machinery as of April 1.

Get the diet right

Designed to handle, chop, mix and feed all types of baled and loose feedstuffs, the Kongskilde VM series diet mixers come in 6.5m3 to 45m3 sizes made from S500 and S650 steel to last longer.