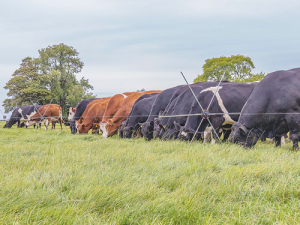 Fed up with the chore of moving electric fences, two Irish brothers came up with an easier way.

Fed up with the chore of moving electric fences — often in the rain and when they would have preferred to be at football training — brothers Charlie and James set out to develop an easier way. Parents Thomas and Laura encouraged them, and the result is Fresh Graze (patented), a device that takes the drudgery out of strip-grazing and helps improve crop utilisation.

It won two awards in the recent National Ploughing Championships Innovation Awards -- the Agri-Tech Start Up Award and the Overall Start-up Prizes.

The system automates the movement of the ‘hot wire’ using a pair of robotic drive units at each end of a run, allowing grass to be allocated to a mob of animals on a continuous basis, at a rate that ensures the entire area is consumed before moving again.

Three years have been spent on development, and Thomas Drumm says it should be on sale within two years and their costs recouped in 18 - 24 months.

In operation, the drive units run on a high-tensile steel wire along opposite boundaries, able to work in ‘breaks’ of up to 300m depending on undulations. The ‘hot wire’ is supported across the span by six-sided spider wheels, and the units are powered by 18V rechargeable batteries that last up to two days.

An integral GPS unit shows where the device is operating.

It saves time and can be programmed to calculate the best timing for a move, using integral software pre-programmed with stocking rates and a measurement of grass cover.

The system can be used to prevent selective grazing and contamination by stock meandering over the crop they should be consuming. This leads to better overall utilisation, better implementation of management decisions and the ability to supply data on where, when and how to whoever needs it.

Live data can be delivered to the operator’s phone or tablet to show progress. Also, production data from the milking parlour can be compared to start and end covers to improve sward utilisation, and this can be monitored to see the effect on milk production or liveweight gains.

The expansion of the dairy industry in Ireland is starting to affect the environmental health of the country’s lakes, rivers and estuaries.