European pump proves its worth on Kiwi farms 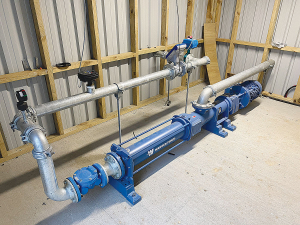 WANGEN pumps are proving their worth on New Zealand farms.

Waikato-based AgFirst Engineering's boss Davieth Verheij was bowled over by WANGEN pumps on his visits to Europe several years ago.

So impressed, that he even considered bringing the pumps into New Zealand himself.

"I first saw WANGEN pumps on farms and biogas plants during my 2014 trip to the UK, Italy, Holland and Germany," Verheij says.

"Then I saw them again in Italy, Holland, Germany and Denmark in 2015. I was quite surprised to see them installed throughout Italy at the biogas plants I visited, given that the Italians manufacture their own progressive cavity pumps and typically proudly use Italian-made products.

"WANGEN really stood out massively on the world stage."

Then at the Agritechnica show in Hanover in 2015, he bumped into Prime Pump's Ben Petrie.

"It'd already begun looking into importing the pumps myself. But we had a lot of project work on, and it's not really our game. I decided to work with Prime Pump instead; after all, that's what they do best."

Today, WANGEN pumps account for around 90% of the installs for AgFirst Engineering, a dairy effluent and water management company that is part of AgFirst consultancy.

Verhiej has been in the game for almost two decades.

"I started on the tools installing water and effluent systems on dairy farms when I was 17. I've come to this from the ground up."

He says he initially worked for a large company with a lot of clients many of whom, at the time, were not effluent management compliant.

"Back then, there wasn't really a lot of information about efficient effluent management. I stepped up to the challenge of sorting effluent systems and focusing on system design and build."

The company provides "whoa to go" solutions for dairy farms throughout NZ but particularly in dairy heartland - Waikato and Taranaki.

"We're one of the few companies which does the effluent management design, manufactures the equipment, completes installation work, manages the contractors - the whole thing," Verheij says.

"Over the last five years, it's been upgrades, extensions or improvements; removing the original pump and replacing it with WANGEN - there's been a lot of that."

Most recently, the company has been a part of the boom in Taranaki.

"It's been about half of our business," he says.

Systems are designed by AgFirst Engineering and manufactured as kit sets before installation in the region by a local company, Coastal Agri Services.

"It's a classic example of word of mouth with farmers. They all talk to each other and when one does it, so do all the others."

They were fine until reaching the service cycle, Davieth Verheij says.

"We started seeing the wear and tear and problems that were there with the stators and drive shaft. Going back to repair or replace them after about eight years was not good enough for us.

"When you compared them to the lifetime benefits of WANGEN, it was a no-brainer.

"We've been installing WANGEN for four years and other than minor start-up glitches, we haven't been back to one yet."

"They're running as low as half the speed and everything's just bigger. And you've got the durable Cardan universal joint. They're indestructible from what I can see, and there's significantly less maintenance cost."

A critical design feature, the Cardan's knuckle-like system is superior to the conventional pin joint. While the pin joint wears, often rapidly, resulting in characteristic 'sloppiness' and ultimately the need for replacement, the Cardan joint operates smoothly and seamlessly, lasting the lifetime of the pump. The design, which has the same diameter as the rotor ahead also avoids constraint in the flow, and the problem of settling, which effectively removes the issues related to fibres becoming wrapped around the shaft.

A one-piece cartridge mechanical seal, filled with oil, rather than a two-piece system, is also far easier and quicker to fit while the oil, again, helps extend the life of the pump.

Verheij says the WANGEN pumps have also delivered quantifiable performance advantages over other pumps. "You get a constant flow of effluent across a property which makes it easier to calculate how much nutrient is going where."

The option of 7.5kW to 18.5kW also give clients options that suit their management system, the flow, the size of the farm, and other factors which need to be built in, including the rainfall. "We have also had multiple pumps custom designed to achieve large head pressures - up to 160m."

"I've never had a blockage with a WANGEN pump. Blockages are just not a problem."

Danish manufacturer Samson Agro has introduced its new Samson PGII Genesis Series slurry tanker series to complement the existing PGII series that have been produced and well received since 2013.

Mastek umbilical effluent systems provide a cost-effective, efficient method of distributing effluent onto the pasture without the need for permanent pipework that can be capital intensive and locked to specific areas.

At a time when the rising cost of inputs like fuel, transport and fertiliser are putting increased pressure on profitability, smart farmers are realising that effective use of yard washings, dairy effluent and farm-yard manures can play an important role in replacing inorganic fertiliser.

With effluent becoming a more important part of farm management, particularly for its value as an alternative to bagged fertiliser, it is timely for the Power Farming Group to be introducing the Fliegl range of tankers.