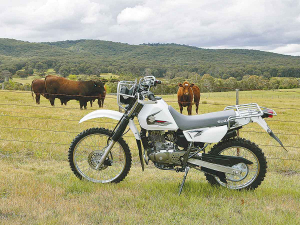 For most farmers, transport has been a key towards more efficient farming practices and as on-farm transport improved, farm sizes increased, to be managed by smaller numbers of staff.

Early attempts at manufacturing farm bikes specifically for New Zealand conditions were rugged, yet very basic. So much so that farmers spent a lot of time either falling off or repairing the early models.

It took several years for farm bikes to become an indispensable tool on most farms, but the Japanese manufacturers took note and started to develop more efficient ways to get around the farm.

Suzuki developed the iconic Mudbug series in the early 1970s with the TF100, 125 and 185 models. These two-strokes were reliable, easy to maintain and most importantly, got farmers around the farm with the minimum of fuss.

Sales boomed in the ‘70s and early ‘80s, right up until when Suzuki introduced the first four wheeled ATV, the LT125.

Farmers immediately grasped the importance of ATVs, offering the ability to be able to carry more, or the convenience of being able to tow a small trailer.

Suzuki has continued the development of farm-bikes and ATVs, including the country’s best-selling farm bike, the DR200 Trojan.

Developed by Suzuki New Zealand, the prototype machine was built in Wanganui, before being shipped back to Japan and being introduced as the DF200ET.

The popularity of this model has seen it become the number one selling 200cc farm bike, built to exacting Japanese quality standards,making the Trojan one of the most reliable and durable two-wheel farm bikes on the market today.

The country might be in lockdown, but farmers and essential farm services are working as hard as ever to keep the rural economy rolling.