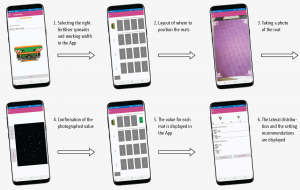 First released in 2015, the system uses 16 lightweight rubber collection mats that work with a free app to automatically evaluate the results.

Testing in 2016-16 discovered that the black mats were unsuitable for dark-coloured fertilisers, so Amazone has changed the colour of the mats to purple to provide the best contrast.

To use EasyCheck, the user places the mats across four rows at specific distances from the tramline, before making a test pass with the spreader. The fertiliser deposited on the trays is photographed by cellphone then the picture is uploaded to the app.

The app automatically compares the volume of fertiliser collected on each row and the ratio between them to calculate a co-efficient of variation; from here the app suggests adjustments to the spreading disc speed, the delivery system on ZA-TS trailed spreaders or the spreading vane position on its ZA-V or ZA-M mounted spreaders.

Blair McElwee, Claas Harvest Centres product manager for Amazone, says the process is much quicker than the conventional system of hard plastic trays and then weighing the contents.

“It takes only a few minutes to lay out the mats, do the test spreading, photograph the mats and then calibrate the spreader,” he says.

“The mats take up little space, can be easily transported on the spreader or tractor and all 16 items can be easily carried by one person.”

Fertiliser use in spring

The refreshed National Policy Statement for Freshwater Management increases the pressure on farmers to improve their nutrient management.

Spread your own fertiliser and save

Bert Quin, managing director of Quin Environmentals (NZ) Ltd and owner of the fertiliser company Quinfert on why we need to be more thoughtful about fertiliser.

OPINION: Most of us are under the impression that all of New Zealand has fertile soil that’s great for growing food. It’s more or less a fairy tale.