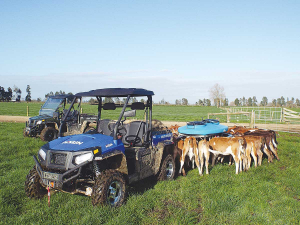 Petrol or diesel? Hisun offers both.

Although it's not a well-recognised name in New Zealand ATV or UTV circles, Hisun NZ has been gaining traction.

The Chinese brand has a very competent range of machines, particularly for those who might be on a tight budget.

With a main factory in Changshou in China, the business has a history that dates back around 25 years and is reported to be the sixth largest supplier of UTV’s in the United States.

Dairy News recently got to try a couple of machines from Hisun NZ on a dairy farm in the Waikato, in the shape of a Sector 500 and the Sector E1. With both machines built around the same chassis, the 500 uses Hisun’s own 470cc single-cylinder, fuel-injected engine, while the E1 is an all-electric, 48V with an AC induction motor said to deliver 38hp.

On first impression, both models look to be put together well, with no signs of typically Chinese-made machinery of the past, that tends to display poor quality welding and low quality, rusty fasteners. Well fitting body panels and a well thought out rear tray, give the machines a modern look, combining with oversize tyre equipment housed under extended wheel arches.

Looking at the E1 first, four dry cell batteries, located under the bench seat in the middle of the machine, combine to deliver the 48V output and a top speed of around 26kph. While this felt a little slow on the road, it was more than enough out on the farm, ideal for following cows walking the central race and supremely quiet moving through mobs of “skittish” calves.

Said to offer a range of 70kms, the machine proved capable of doing a day’s work before requiring recharging when in the “high” setting of the low-medium-high selection. We suspect that pulling heavy loads in the lower ranges will reduce this range, but the reality is, we never encountered the problem. Charging is easy, with a self-contained unit- just plug into the mains and recharge in around 7 hours. Plus points are the silent operation, only spoiled by an annoying reversing beeper that is likely to fall foul of a heavy hammer, then exceptionally low running costs. On the minus side of the see-saw, a foot operated parking brake located under the left side of the dashboard needs a double-jointed knee, while anyone with a “sunken” six-pack will find it a tight fit behind the steering wheel. Additionally, those oversized tyres packed into narrow wheel arches, lead to plenty of mud flying around, despite the wheel arch extensions.

Taking a closer look at the petrol 500, the same negatives apply, sans the reversing beeper, but the engine started easily, settled to steady tick-over and show plenty of power off the mark and up to cruising speed. Towing an 80-teat calfeteria loaded with 500 litres of milk proved no problem and easily travelled through muddy gateways, with the 4WD on-demand system selected.

Both machines offer a towing capacity of around 500kgs, come standard with a 3500lb, front-mounted winch and benefited from a combination of halogen and LED lights. Ground clearance of 30cms coped with muddy areas well, although in extreme conditions, we suspect the heavier all-electric unit would come to grief first.

Ride was comfortable, particularly so at higher speeds and over rough areas, no doubt helped by nitrogen over oil dampers at each corner, complimented by discs all round to bring the units to a prompt, controlled stop.

In summary, Hisun appears to have shrugged the image of poorly manufactured Chinese machines and offer an alternative to the mainstream brands, especially with starting points of $12,500 (petrol) and $16,500 (electric).

The increasingly popular UTV/side-by-side sector offers a wide range of choices for farm or rural mobility, which has been made even broader with a new machine from Yamaha.

While there appears to be a gradual move towards UTV or side by sides, the ATV/quad bike still plays a major mobility role in the New Zealand rural landscape.

Confirming a move signalled over a year ago, in response to a directive by the Australian federal government that all quad bikes must be fitted with operator protection devices, Honda will stop selling quad bikes in Australia on October 10.