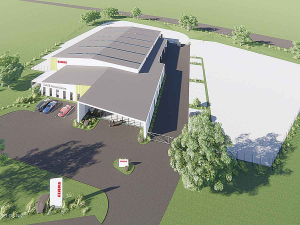 An artist’s impression of the new $10m building.

The project is taking place on a three-hectare site, that will become the new home of CLAAS Harvest Centre, Waikato. It will also include a parts, training and demonstration hub for five other dealerships in the North Island.

“Hamilton is our largest dealership in the North Island and has developed a solid business based on forage harvesting technology,” Wilson says.

“This expansion will spearhead the continued growth in sales of our extensive range of front-line tractors, material handling and feeding equipment.”

Landpower represents brands of farm machinery, including Claas, Amazone and JCB, via a network of 32 company owned and franchised Claas Harvest Centres on both sides of the Tasman.

Claas Harvest Centre, Waikato traces its roots back to the well-known A.M. Bisley & Co, which was established as a seed, grain and produce store on the corner of Ward and Alexandra Streets in Hamilton in 1920.

In 1987, Bisley’s farm machinery business was acquired by Farmrite, the Invercargill-based farm machinery importer and distributor established by Herby and Pam Whyte in 1975.

In 1995, it was rebadged as Landpower, which at that stage operated 12 franchises and about 50 independent dealers throughout Australia and New Zealand.

The CLAAS Harvest Centre display at Mystery Creek will include the public debut of the all-new CLAAS Disco 10 series side-mounted rear mowers.

Disco with the moves

The latest Claas Disco 10 mowers, incorporating the Max Cut cutter-bar, are available in six working widths from 2.2 to 3.3 metres