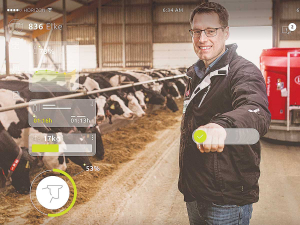 Lely says some of its innovations are compatible for all markets around the world. However, pilot farms trialing the new products are mostly in Europe.

The company says the vision of the farm of the future is centred on livestock: repetitive tasks are automated, allowing dairy farmers to concentrate on things that are important to them.

Farms are completely robotised and operational 24/7. The farm of the future is based on the principle of allowing cows to move freely, so they can behave naturally, and their welfare is guaranteed, it says.

“We live in a rapidly changing world where the population continues to grow,” says André van Troost, chief executive of Lely.

“We desperately need farmers, because we expect the demand for food to increase by 70% by 2050. The impact of farming on the environment is also coming under increasing scrutiny, and regulations are becoming stricter.

“Dairy farmers therefore have to change the way they work to guarantee their future.”