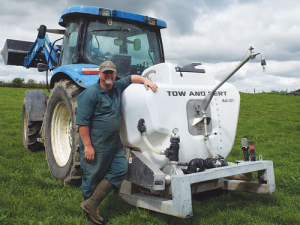 Tow and Fert sprayer systems made by Metalform have been around for several years, growing in popularity with users who cite reduced costs and other benefits.

Dairy News took a closer look at what makes the machine tick, seeing one operating on the 140ha farm Matthew Zonderop runs in a 50:50 partnership at Te Poi near Matamata, running a herd of 420 cross-bred dairy cows.

Zonderop had seen a friend using a Tow and Fert with success, so he took the plunge three years ago, buying his own machine and “never looking back”.

In essence it’s a heavy-duty spraying rig with integral mixing and agitation.

Zonderop’s Multi 1200 linkage-mounted machine has a 1200L moulded tank carried in a galvanised frame, pipework with extensive use of stainless steel, and attachment via snap-lok fittings.

Metalform says foliar application of nutrients leads to quicker uptake, reduced losses to the atmosphere and leaching, with the added benefit of allowing the user to combine several products in a single mix to help reduce labour and operating costs.

Zonderop lauded its versatility: the unit stays on the back of the tractor for nine months of the year and gets used for many tasks.

He runs a grass-based system that typically sees paddocks being grown to 290 - 3100kg DM/ha prior and 1500kg DM/ha post-grazing. He moves the sprayer onto the paddocks about five days after grazing to apply sulphate of ammonia, Pro-Gib and, if required, Baton herbicide.

“Application is uniform and up to 10m wide depending on wind conditions.

The application process sees 500kg of fertiliser dissolved and carried in a suspension of 900L of water; this takes about 15 minutes and agitation/circulation continues as the unit moves to a job or around the farm.

Zonderop believes the nature of the system, particularly the rapid uptake by plants, allows him to reduce application rates and save about 25% on conventional application methods.

Operation is said to be easy with a built-in weighing system and a distinct lack of electronics; the operator selects the nozzles and alter application rates to suit the job.

Zonderop also uses his machine alot during spring to apply magnesium sulphate for herd health, normally as a blanket coverage that lasts for up to 90 days before grazing; this removes the daily one-hour chore of application by quad and spreader ahead of the herd.

Likewise when applying zinc sulphate to prevent facial eczema, although he still uses a half dose in the water supply as an insurance policy.

The machine can apply chicory seed in suspension and sometimes sows grass seed in rough areas.

During the dry last season, when crops of turnips or chicory were being established, the Multi 1200 was used for irrigation, applying effluent diluted 50:50 with water. This was time-consuming, Zonderop agreed, but it proved to be a drought breaker.

Similarly the unit is also used to ‘vacuum’ silt and algae from water troughs, rinse them with a high-pressure nozzle and then refill.

Would you buy another? we asked him. Yes, he replies, probably trailed and with more capacity and able to traverse the farm’s undulating land more easily.

With new nitrogen fertiliser restrictions due to kick in during July 2021, with a target to apply less than 190 units N/ha, many farmers will be having a re-think on fertiliser application.

The saying goes ‘when things get tough, the tough get going’ and this is happening here in New Zealand and further afield.

Many benefits in using fluid applicator

Matamata farmer Matthew Zonderop says he’s never looked back since he started using a Tow and Fert unit about three years ago.