Making good use of slurry 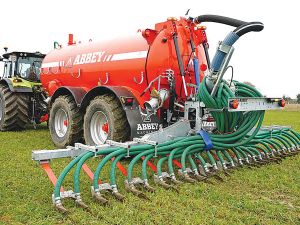 Effluent is rich in nutrients and its vital to spread material more evenly and at a known application rate.

The application of slurry or effluent has long been recognised as an effective method of returning nutrients to grazed or harvested paddocks.

Having already seen large price rises and the likelihood that they will climb higher because of the Ukraine conflict, it follows that its ongoing use will need to be more efficient.

We have also come to a realisation that resources of potassium (P) and potash (K) are not infinite, while nitrogen (N), although abundant in the atmosphere, takes large amounts of energy to convert it to a usable form, so there are limitations, largely dictated by energy prices.

Dairy effluents are rich in these three basic nutrients, so it will become increasing necessary to spread material more evenly and at a known application rate. This is particularly important as farmers become more reliant on slurries and effluents as a replacement source to replace inorganic fertilisers, rather than treating them as a waste product that is a nuisance to dispose of.

While there are large numbers of slurry tankers in use on New Zealand's farms, the majority will be fitted with traditional "splash plate" distributors that typically result in a large percentage of the available nitrogen being lost to the atmosphere and the risk of odours causing problems for neighbours.

Over the years, we have seen the increased use of dribble bar or trailing shoe application systems that as the name suggests, deposit the slurry or effluent directly to the ground. More recently, we have seen the incorporation of flow meters to record the total amount of material applied and its location. The next step will be the infinite control of application rate - surely a must for any type of fertiliser spreader.

Automatically recording application rates, application dates and location via a Trimble GPS system, collected data is recorded to a cloud-based farm management software that is available to parties such as the farm manager, tractor driver or universty academics who will use it in ongoing research projects.

A further ability of the system is to prevent slurry being spread near sensitive areas such as watercourses, or indeed, to prevent application in any paddock that is not pre-planned, meaning that the valve will not open if the tanker is in the wrong area of the farm. These restrictions can be easily controlled via a mobile app on a phone or smart device.

More importantly, application rates can be altered in real-time, meaning that flow rates can be used in conjunction with prescription maps, drafted following soil sampling and previous cropping data.

Looking at the UCD machinery in more detail, the Muller flowmeter has no moving parts relying on measuring conductivity of the slurry against its inner lining, meaning there are no risks of blockages. The flow meter and valve are installed on the suction line which takes the liquid from the centre of vessel rather than rear.

The control unit was placed in a sturdy box, attached to the front of the chassis.

The placement of an infinitely variable valve "downstream" of the flow meter means the amount of material for spreading can be regulated automatically, adjusting in tractor forward speed, maybe because of terrain, delivering just the right amount material to the inline macerator, then onwards to the applicator booms.

Danish manufacturer Samson Agro has introduced its new Samson PGII Genesis Series slurry tanker series to complement the existing PGII series that have been produced and well received since 2013.

Mastek umbilical effluent systems provide a cost-effective, efficient method of distributing effluent onto the pasture without the need for permanent pipework that can be capital intensive and locked to specific areas.

At a time when the rising cost of inputs like fuel, transport and fertiliser are putting increased pressure on profitability, smart farmers are realising that effective use of yard washings, dairy effluent and farm-yard manures can play an important role in replacing inorganic fertiliser.

With effluent becoming a more important part of farm management, particularly for its value as an alternative to bagged fertiliser, it is timely for the Power Farming Group to be introducing the Fliegl range of tankers.