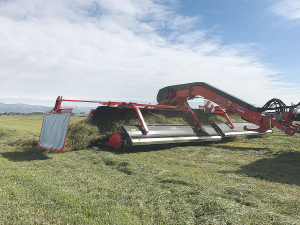 Kuhn NZ will show at Fieldays a new series of bar mower and an addition to its forage raking range — the Merge Maxx 950 belt merger.

In the mower line-up, the all new GMD 355 top drive bar mower, although like the well-known GMD 310 has its cutter bar driven through the top of the first disc, eliminating the need for an inner skid drive which can drag crop when the machine is used for topping.

The FC 3125 and FC 9530 triple mower conditioner remain the maker’s ‘flagship’ machines with premium features such as hydraulic ‘lift control’ suspension and the on-the-fly hydraulic side shift, giving between 30 and 50cm of overlap front to rear.

Complementing the mower ranges, the new GF 8712 T trailed tedder has Kuhn’s new HLC (headland lift control) system that raises all rotors at least 50cm from the ground in five seconds from the tractor’s control unit.

On the swath presentation front, the all-new Merge Maxx 950 belt merger uses a different method of windrowing, two independent pick-ups and hydraulically driven conveying belts to achieve gentle swathing of forage in crops such as lucerne.

Also on the site will be the forage harvester that won the Agritechnica Machine of the Year 2018 award -- the FBP 3135 fixed chamber combi baler. This uses the maker’s patented film on film and net binding systems which help to achieve high silage quality at the lower costs.

The design, said to result in a guaranteed binding start under all circumstances, uses two regular 750mm film rolls rather than one large mantle film roll, saving 30% on film costs due to the higher pre-stretch ratio of 70%.

Operators looking to optimise forage use can see the latest vertical twin-auger mixer wagon -- the Profile 28.2 CL. A new range is available in single auger format from 4m3 to 15m3 or from 12m3 to 34m3 capacity in twin auger configuration.

The Profile 28.2 CL model on display has industry leading K-NOX mixing augers, using an alloy of chrome and ferrites, making it a more ‘stainless’ steel for intensive use.

Kuhn fertiliser spreaders on display will include a fully GPS and ISOBUS controlled simulator. The Axis 40.2 M-EMC represents the high-end of the Kuhn mounted spreader range, with built-in variable rate and section control function ready to unlock. The patented EMC (electronic mass flow control) automatic rate control is said to be unlike any other on the market, weighing its output on each spreading disc every second for unrivalled accuracy.

At the other end of the spectrum, the MDS 19.1 spreader is an entry level twin-disc spreader that’s truly simple. It’s simple to setup via either a flip chart or phone application and simple to operate with a push-button start option or hydraulic open/close via the tractor outlet.