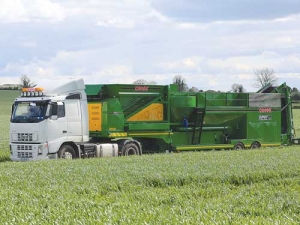 With an increase in fodder beet plantings in New Zealand, an Elephant fodder machine makes sense.

With a history dating back to 1990, and a background based on serving the sugar beet industry in the UK and Ireland via a supply partnership with Armer Salmon (AS),

Cross Engineering had to make a major change of direction when the only sugar beet factory in Ireland closed and AS was forced into liquidation.

Fortuitously, the growth in anaerobic digesters gave the company an avenue to produce beet cleaning equipment as the crop became important in this area, not least because the gas production could be started after 15 days, compared to maize which took around 55 days to ferment.

With the massive rise in the plantings of fodder beet in New Zealand, it made sense to look at supplying machinery for the sector, and the Elephant looks like it might fit the bill nicely.

Mounted on a semi-trailer chassis, and moved by a tractor cab unit, it is easily moved from job to job, and being fully self-contained is easy to set it up, carry out the work, pack up and move to the next job.

Power comes from a 120hp JCB Dieselmax engine that delivers the necessary get-up-and-go to the hydraulic systems that are the heart of the unit.

‘Dirty’ beet is loaded into the hopper at the front of the machine where a cyclone effect removes stones and any large particles of dirt. Debris is transferred by an elevator into a trailer for eventual removal.

Beet then moves into the wash cycle which ensures the crop is clean and safe for cattle and presents an acceptable sample for anaerobic digester plants. The wash has a recycling system that removes dirt from the water to ensure minimum amounts are used for each job.

From the cleaning area, washed beet is transported by elevator to the discharge point where the choice is either to discharge into a trailer for onward transportation or direct into a stack.

There is also an option at the end of the discharge elevator to engage a chopper unit to cut up the beet. This is swung into work hydraulically and uses a rotary drum to slice the beet, with a degree of chop influenced by a hydraulically adjusted re-cutting frame. The chopped material can then be fed direct to cattle, or as is becoming more common, ensiled normally with citrus pulp or forage maize.

With outputs around 100 tonnes per hour for washing only, or 80 tonnes when chopping, the Elephant will make a large pile of cleaned beet by the end of the working day, and no doubt increase the popularity of this crop.

After 16 years experience of feeding fodder beet to his dairy cows, Brendon Woods says he would hate to be without it.