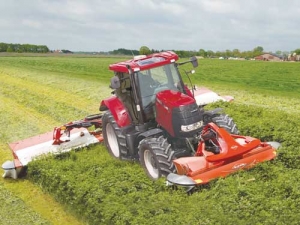 Triple mower set-ups have become the norm for contractors looking to knock down large areas of crop in front of forage harvesters with huge appetites.

The latest offering from Kuhn importer CB Norwood Distributors looks up to the task.

The FC 9530 mower conditioner combines a single front, and two rear units laid out in the normal ‘butterfly’ formation; it offers cutting widths from 9.1 to 9.5m.

Using the Kuhn Optidisc cutter bar design, with Fast-fit knives and Protectadrive safety bearings, each unit is mounted using a pendulum-type hydraulically controlled connection that allows vertical and lateral movement to ensure the best ground adaptability and a clean cut, even at high speeds.

The conditioner units use a full width rotor with pivoting fingers and an adjustable baffle plate to offer a range of conditioning effect in varying crops, with a choice of rotor speeds of 1000 or 750rpm.

The latter is particularly useful for delicate crops such as clover or lucerne, or it can be used to create a fluffy swath which easily passes between the front wheels, in the case of the front unit.

Kuhn operations manager for NZ, Brian Robertson, explains that “the FC9530 triple was developed for high power tractors, operating at high speeds to achieve high productivity. All the mower units have a heavy duty drive train, using the Optidisc cutter bar, and lift control suspension for best ground following. This system allows up to 50cm of vertical movement on the rear units, and for the front, which can be more susceptible to impact, the range of movement is 70cm.”

In use the mowers can be controlled by a single panel that lifts them simultaneously or individually, and overlap between the front and rear units can be adjusted 30-50cm to eliminate striping on turns or while operating on sidling ground.

For transport the unit folds to 2.95m and for storage it can be parked vertically or unfolded and placed horizontally.