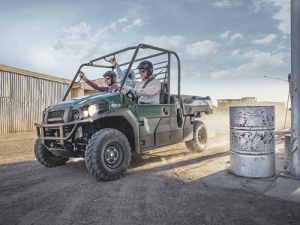 Kawasaki’s Mule model of ATVs have been regularly upgraded.

Kawasaki heavy Industries made its first side-by-side utility vehicle in 1998: the Mule 1000, powered by a 450cc liquid cooled twin based on a motorcycle engine.

At that time in New Zealand import tariffs made the unit expensive so it sold in low numbers.

The first model to sell in large numbers in NZ was the Mule 500, a 2x4 light utility powered by a 300cc air-cooled single; then came the Mule 2510 4x4, a larger machine powered by a liquid-cooled, 620cc V-twin.

In 2015 Kawasaki introduced the Mule Pro FXT, an all-new model powered by a 3-cylinder 820cc petrol engine able to carry up to six people. This was the start of a new Pro series model line which now includes a Mule Pro-FX, 3-seater and 3- and 6-seat Mule Pro-DX and DXT diesels – altogether nine models in NZ

Unlike many side-by-side vehicles, Mule was not designed as a recreational/utility vehicle, but as a workhorse for agriculture and industry. Manufacturing is at Kawasaki's plant in Lincoln, Nebraska.

All Mules except the Mule Pro-FX/FXT 820cc petrol models are speed limited – popular on some farms where speed limiting helps keep workers safe.

The new Mule Pro-DX diesel is powered by a Yanmar, 953cc, 3-cylinder diesel and has the same strong chassis and driveline as the other Mule Pro series models.

It has a flat bottomed, gas assisted-tilting cargo bed capable of carrying at least 450kg.

A wide track gives stability over rough terrain and electrically switched 2WD/4WD and a lock/unlock rear differential ensures plenty of traction when needed.

Electric ATV of the future

The look of All Terrain Vehicles (ATV) hasn’t really changed over the years, but CF Moto recently gave the market a glimpse of where things might be heading.

Described as Kawasaki’s premium Mule side by side, the PRO-FXR is a sport utility machine that combines a wide-body chassis with a 320mm shorter wheelbase.

No dubious quality in these UTVs

Although it's not a well recognised name in New Zealand ATV or UTV circles, Hisun NZ has recently been gaining traction.

Call them what you will, but UTVs, side x sides or ROVs have found a place in much of rural New Zealand.

Industry and govt at odds over CPDs

The farm quad industry and its regulators are at odds over the fitting of rollover devices on these machines.