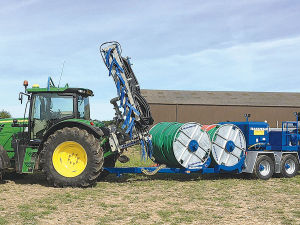 Aimed at achieving single operator use via remote control, the design also incorporates a 200mm wider chassis to allow it to carry more equipment.

Cleverly, the control system doesn’t rely on radio connectivity, but instead can connect a mobile device, using its 2G to 5G data connection, for control of one or more engine-driven pumps.

The company says that communication is not compromised by distance and multiple pump units can be controlled by a single device. This, combined with pressure sensors and a flowmeter, allows the entire umbilical system to be operated and monitored by one person.

The remote control offers a 7” colour screen that can be operated using a mobile device. The configuration also includes Tramspread’s mapping and recording technology that can generate reports that prove placement, area treated, and volume applied.

Power is provided by a 175hp Iveco engine that drives a Bauer SX2000 pump, said to be capable of pumping up to 300m³ an hour, depending on distance and hose diameter.

Elsewhere, up to 2,000m of drag hose is carried on two galvanised, detachable spools located at the front of the trailer, while an additional 1,000m of hose would typically be carried on the tractor front linkage, delivering a system capacity of 3,000m.

Detail changes see a longer drawbar, allowing an applicator, such as a dribble bar, to be carried on the tractor’s rear linkage while towing the trailer. A 900-litre fuel tank is positioned over the twin sprung axles with a remote-controlled compressor mounted above.  There is also a storage provision for several suction hoses, and a pair of handy toolboxes.