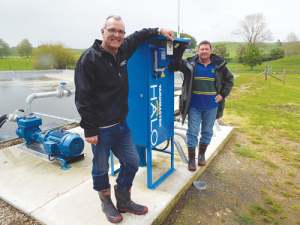 Rod and Sandra McKinnon milk 365 cows through a 32-point rotary on 120ha (effective) at Oakstone, a few km southwest of Matamata.

Always interested in the environment, they have a picturesque farm with native bush in the less accessible areas.

Lately they agreed with Waikato Regional Council to “put a bit more back”, creating a 25ha wetland alongside the Mangawhei stream running through the property.

They’ve raised production over the years, and their deciding to install a feed pad led them to review the effluent management system, until then a typical Kiwi effluent pond.

With local manufacturer Reid and Harrison, Matamata, they set about creating a system to capture and re-use effluent, rather than treating it as a by-product.

The system commissioned earlier this year certainly does that, starting with two holding tanks that flood wash the feed pad to keep things clean. Those washings and cleanings from the milking shed into a wedge which acts as a separation dam, before the liquid drains into a Butyl-lined, 2.7 million litre effluent pond.

The hardware that move the effluent centres on a 22kW Yardmaster four-stage self-priming pump, which can work at variable rates and outputs depending on ground or weather conditions.

In practice that means high flow rates until the flood tanks are filled, and the ability to achieve variable pressures, thus allowing the irrigators to run at constant application rates as they travel over variable terrain.

A shore mounted 7.5kW stirrer keeps things moving in the pond, and two Williams travelling irrigators get the product onto the paddock.

The pump feeds a distribution manifold with six actuator controlled valves, two feeding the flood wash tanks as a first priority, two feeding effluent delivery lines on the lower flatland paddocks, and the other two destined to feed higher ground, typically used for maize production, 70m higher and up to 1.5km away.

That’s the “do it properly” matter sorted; what about “let’s make it easy”?

At the heart of the system is a sophisticated Halo management and monitoring system which controls the pump, stirrer and all the delivery lines via a cloud based system. It allows the McKinnons to see what is happening with the system in real time, change operating parameters and review operating history using a suitable smart device anywhere, from out on the farm or from Egypt, as during their holiday earlier in the year.

The system offers various advantages, not least peace of mind.

They are now realising the nutrient value of the effluent, have all but eliminated the use of mineral fertiliser in their lower paddocks, are sure their farm complies fully with regional guidelines and are future-proofed against likely caps being placed on nitrogen use.

McKinnon also likes having instant information, including weather, rainfall and ground temperature, as part of the Halo system, and being able to make informed adjustments to make the most of this valuable resource.

He sees the system saving a lot of time: he need not manually switch on pumps or change valves, and he knows he will be instantly alerted to any problems and can remotely monitor the system when he is way from the farm.

What of the future? The first project will be to extend the effluent delivery line to the higher portion of the farm, then look closer at geo-fencing (virtual perimeter) sensitive areas such as drains or rivers, to get greater control of the travelling irrigators.