Snap chillers hoping to be a drawcard 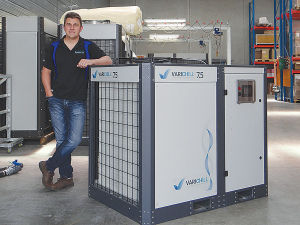 The only snap chilling system that can simultaneously perform a range of functions is set to be a drawcard at Fieldays.

The variable drive VariCOOL, VariCHILL and VariVAT range of snap chilling systems are unique in being able to to snap chill milk in multiple vats, generate hot water and measure, record and report milk temperature -- all at the same time.

The brainchild of Coolsense founder Allan Steele, the systems are designed and manufactured in New Zealand. They give farmers assurance that their milk is being chilled to the highest standards with minimal power use.

Says Steele, “Compliance across a range of functions is a distraction for farmers from what they do best – producing the best milk in the world.

“They want systems which do what the makers say they’ll do, easily and efficiently.

“Our systems do that. One box, easily retrofitted to existing sheds or incorporated into new builds, snap chills milk to below 6 deg C within two hours of milking. One ‘box’ is capable of chilling multiple vats simultaneously.

“The range of chillers operate on variable speed matching demand and minimising power usage. They also generate high grade heat recovery to a maximum of 70degC and 480 litres per hour.”

Steele said an awareness that farmers want to be able to measure the efficiency of their milk chilling led to the company developing a system which measures, monitors and reports chill capacity and efficiency and heat recovery in real time.

“The Vari-COOL’s energy meter enables it to calculate its return on investment. It calculates and reports energy savings, logging the temperature of the milk before and after snap chilling along with holding temperatures in the vat in real time.

“WAN (wide area network) connectivity enables data retrieval and self-diagnosis monitoring of tank, milk temperature and system. The system sends a warning text should a system issue occur with most able to be rectified online.”

The Coolsense system chassis is galvanised and powder coated and the condenser is polymer dipped, giving the system an expected life span of at least 20 years.

Coolsense will be at site E80 at Fieldays.

Machine cleaning systems maintain milk quality by aiming to remove all milk residues from the plant and destroying any resident bacteria.

Milk quality is a key driver of value for Fonterra.

Keeping the heat and stress out of your milk vats

Milk cooling affects milk quality: the quicker milk is cooled after milking, the better the quality when it is collected from the farm.

At the end of lactation, dairy cows require a dry period that is sufficiently long to allow the udder tissue to repair and rejuvenate.