Time to wake up and get safe! 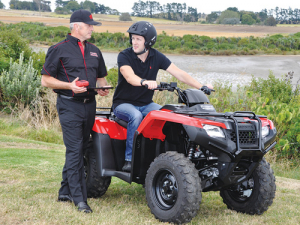 Quad fatalities make the headlines, but all on-farm deaths need a serious look at by farmers.

While quad fatalities keep fuelling a media frenzy, it’s time to look at the broader picture and try to understand what makes our farms such dangerous places.

Dangerous they are: statistics between 2013 and December 2015 show farmers suffered 63 deaths*; the next-highest sectors, transport and warehousing, had 17 and forestry 14 respectively during the same period.

So the death rate on farms is around four times higher; why is that? If you’ve visited a quarry, warehouse or forest lately, you’ll know that before you get to the action you’ll be hit with rules, hazard identification, hi-vis vests, hard hats and steel-toe boots. Easy to do, you say, on a compact ring fenced site, but much harder to do in the backblocks of New Zealand.

Of course, it’s just not possible to have ‘big brother’ watch your every move, so the farming community has to take the task on board and start looking after themselves and their cohort.

You can learn a lot from numbers and the story they tell. Of all the deaths recorded in 2013-15, 43% were suffered by people 60 and older, and 50-60 year olds pushed that percentage to 56%. You have to wonder if the ‘I’ve-always-done-it-like-this-and-got-away-with-it’ mentality causes over-reporting of this age group.

Looking at the causes of the fatalities makes interesting reading too. While quad deaths make up around 32% (20 deaths), the numbers also show that 68% occurred in other situations: tractor rollovers accounted for 14% (9) and being struck by tractors or falling objects, such as big bales, caused 20% (13). Machinery or PTO shaft accidents caused 10% of fatalities (6), and drowning, crushing or burning caused 20% (12). Fatalities involving vehicles, including three fertiliser spreading truck rollovers, accounted for 14% (9), showing that farms are particularly dangerous places.

We have to be proactive to stop this waste of life and the ensuing misery it causes, by understanding the risks that mundane tasks can expose us all to. The new health and safety legislation has focused some attention. But we need to get beyond the ‘she’ll-be-right’ attitude said to typify being Kiwi and understand that it might not be alright.

If you see somebody on your property – family, staff or visitors – doing something risky, stop them and talk about it. You might get an earful about being a Jessie, but you might just save a life.

On-farm transport was revolutionised with the arrival of quads, but really came of age with the side-by-side.