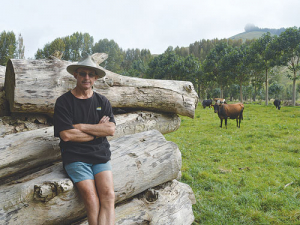 The 62-year-old dairy farmer says his philosophy is all about maximising farm assets.

When he bought the 37ha farm in 1988 the banks were reluctant to lend him money; his neighbours thought planting trees on a dairy farm was a crazy idea.

“The banks said ‘it’s an uneconomic unit and you’ll go broke’. The dairy company guaranteed my loan and backed me to the hilt and I managed to buy the farm,” he told Dairy News.

When his marriage ended, Smith had to refinance the farm to pay out his first wife and the banks again refused to lend to him; he had to borrow from a finance company and the high mortgage interest rate got him thinking.

“How could I pay off the loan quickly? The cows were my baseline; they had to keep making money.

“I started looking at what other businesses could be added to the farm that wouldn’t distract me from the cows. I have so far found three.”

Paulownia trees are the most common grown on the property; Smith plants about 100 trees per year and harvests 50 - 60 trees per year for sale. He sells the timber nationwide to surf board makers.

The farm has about 40 ducks laying about 2000 eggs per year; Smith sells the eggs for $7/dozen. And he has developed accommodation for tourists who come to fish for trout in a waterway crossing the farm.

His revenue from selling timber last season was equivalent to $1/kgMS; the duck egg business breaks even.

Smith says importantly none of the businesses detract from the cow income stream at all. “I have added layers on layers while keeping my costs in check.”

He is the sole employee and mates “come around to give me a hand from time to time”.

Despite the low milk price over the last two years, Smith has not incurred a loss.

“It was tough but not a killer. I didn’t go to the bank for more money or to increase my overdraft.”

There is nothing unusual about Smith’s dairy operation; he targets 30,000kgMS/year. Cows are milked twice a day until mid January and then once-a day. Calving is around July 15.

The Paulownia provide steady income on top of the milk cheque, and Smith sees his agri-forestry business as uncommon on dairy farms.

“I may be the only dairy farmer in the world who practices agri-forestry; it’s common with cropping farmers and some drystock farmers.”

His foray into agri-forestry was accidental, after he bought the farm.

“I was a dairy farmer and most dairy farmers cut trees down because they are a pain: they drop branches, smash fences and the cows chew them.

“When I came to this farm, it was eroding quite badly -- the hills and along the river.”

Waikato local authority advisors suggested a farm erosion control plan, agreeing to pay for pine and Mexican Cyprus trees for Smith to plant; he was to fence off waterways.

After planting these trees Smith realised it would be 28 years before he made money selling them. He then saw an advertisement urging farmers to plant Paulownia to sell for milling after only 10 years.

He paid $250 for the seedlings and “planted them in my nursery and they bolted away. I thought ‘these things can grow’ and planted more by the end of the year.”

But before he could harvest the Paulownia the sawmiller went bust, leaving him with trees to sell.

Later, at a forestry conference, he found a man willing to buy the Paulownia after Smith felled it but he later withdrew his offer.

“This left me with no choice but to go out and do my own marketing; sales have doubled year on year since then.

“It forced me to take a path for which I had no experience -- looking after trees and marketing. Now I’m doing all that.”

Smith, who supplies Fonterra, says he now appreciates what the co-op does for its farmers outside the farmgate.

“I just send milk out the gate and they do all that stuff for us…. Now I run my own website, deal with customers, make sure I get paid, quality control… the whole shooting box. I am doing everything.”

Smith says other farmers discouraged him from planting trees.

“My neighbours called me nuts, saying “you’ll go broke planting those trees; they will shade the grass and you won’t be able to milk cows”.

But his success has made him an agri-forestry convert. “I am a preacher now, going around telling others.”

Smith hosted a Small Milking and Supply Herds (SMASH) event on his farm in March.

Graham Smith says he decided to raise free-range ducks after noticing a demand for duck eggs.

He sells the eggs to locals “who like eating them and for baking”.

One of his clients – in Kawhia – buys five dozen every week and on-sells them.

Raising ducks isn’t costly or time consuming. “You let them out in the morning and call them back for feeding at night; you know where they are because they lay eggs in the early hours of the morning”.

“Slugs, snails, crickets… anything that moves basically they gobble them up. They know where the cows have been the night before; you see the 40 ducks up and down the paddock like a vacuum cleaner, eating up all insects.”

The farm also has about 100 wild turkeys; they also keep slug and pest numbers down in the paddocks.

The idea to build tourist accommodation came to Smith after an Asian man turned up at his gate seeking permission to fish for trout in the river.

“I asked him where he was from; he said ‘I flew in from Singapore yesterday just for trout fishing and fly back home tomorrow’.

“That blew me away; they are rich people and I thought ‘should I be milking them like I milk cows?’ ”

The farm has a two bedroom unit with its own cooking and toilet facilities. Plans are underway to expand the business.