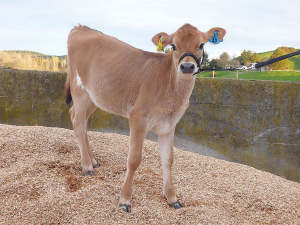 The ministry has created a poster and a teacher pack with basic biosecurity tips, to help keep calves healthy on the day. Packs have been mailed to 1000 rural schools.

They tell how to transport and hold calves (separate pens, at least 2m apart, own water and food), being registered with NAIT, and ensuring a safe environment for calves and people.

Bringing together animals from different herds poses a relatively low risk of disease spread, but precautions minimise the hazard risks.

“Calf club is part of rural life,” says MPI. “But in the wake of the M. bovis outbreak, some events have not gone ahead.

“MPI is supporting clubs to ensure good biosecurity, so that risks are minimised and calf club is fun for everyone.”

Keeping calves separate is the key, as M. bovis is mainly spread via long nose-to-nose contact. Holding pens are the best way to keep individual calves separate from each other.

Calves from different herds or farms should be transported to and from calf club separately, and kept separate at all times.

If calves are sick they should stay on the farm.

To help reduce contact between calves while they’re parading, calves should wear a halter at all times.

MPI says someone must supervise calves while they’re being led around, to control them and keep them apart.

MPI says it has seen no evidence that M. bovis survives for long once exposed to air and UV light, so the risk is low of it spreading via effluent.

But in the interests of general hygiene and biosecurity it’s a good idea to lay down straw to collect effluent.

“Regularly remove faeces from the ground. Use hand sanitiser to minimise risks of transmitting.”