Being green and profitable 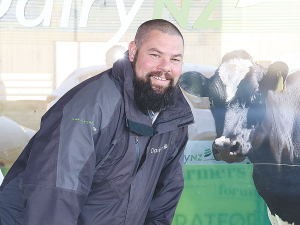 A major, three-year research project is underway in Taranaki to see what can be done to practically reduce the environmental footprint of dairy farmers and, above all, ensure that farms remain profitable. Reporter Peter Burke looks at the initiative and how it's progressing.

The project is led by Dairy Trust Taranaki in conjunction with Mark Laurence - DairyNZ's regional leader in the province.

He heard about the trust working on a project called 'Future Farming', which was designed to see what farming might look like in the future with greenhouse gas and nitrate restrictions, as well as new animal welfare requirements, and still be profitable.

"At the same time, DairyNZ had come up with a programme called Step Change. In conversation with the trust, I said one of the things I'd love to do is get some farmers and work with them, at an in-depth level and see what some of the practical things are they can do to make changes?" Laurence told Dairy News.

"We have a whole lot of theory and then you have a lot of science. But there are 1500 to 1600 farms in Taranaki going to have to make changes. So, the question was how do we build the knowledge and make thos changes in a way that every farmer is capable of implementing? We got funding and the project is now one-year-old."

There are two distinct parts - Gibson Farm is one of two properties owned by the Trust and located right beside the Fonterra factory at Hawera.

Gibson Farm has divided itself in half but, rather than a line down the middle, the split is based on alternative paddocks to get a better balance. Half is called the 'future farm' and the other is a 'control block'. Each trial block runs about 130 cows.

"The future farm is allocated 70 units of N, limited PKE and is doing things like deferred grazing, introduced plantain and chicory so there is a diverse pasture type and a lower stocking rate," Laurence explains.

"Conversely, the standard farm uses PKE, is allocated 190 units of N and the stocking rate is higher."

The first year of the trial saw the environmental targets achieved, but as a significant financial impact. This was in part due to the fantastic summer offsetting predicted gains for the lower stock farmlet.

As part of his contribution, Mark Laurence has selected four farms in the province representing different climatic conditions and soil types.

There is a coastal farm, one at a high altitude, another at medium altitude and the final one has a different class of land to the others. He says it's really important to remember the project's key focus is profit - rather than milk solids.

Laurence has spent many hours with the partner farmers, whom he says are future focused and pretty switched-on people and run successful commercial operations.

"What we are talking about is how do we make changes to a farm system that can evolve to the future, but also stay profitable?" he adds.

"At the Gibson farm, you can get highly-technical and do a complete change in farm systems. But to ask a farmer running a commercial operations to do a change in farm systems is unreasonable. Not only that: it's highly unlikely that it would be effective. So, what we are saying is, taking your farm systems, how can we tweak it to make the improvements we need within how you are already operating?"

Laurence says for farmers who use lots of nitrogen, the challenge is hot to reduce that and still grow sufficient grass to maintain production.