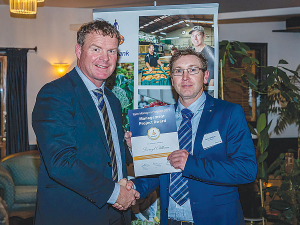 Selected from a group of New Zealand's most progressive farmers - graduates of the 2021 Rabobank Farm Managers Program (FMP) - Oldham was recognised for his business management project, which highlighted how he had utilised the lessons from the program in his role as farm manager on the 200ha farming operation he runs in partnership with his wife Anna, and parents Peter and Gael.

The Oldhams' farming partnership is located in Westerfield near Ashburton. As the farm manager, Darryl is involved in all the day-to-day aspects of running the business which grows cereals, small seeds, peas, maize for silage, and fodder crops for finishing lambs.

Oldham says his management project assessed the viability of converting all or part of the farming operation to sheep milking.

"Incorporating lessons from the FMP, I looked at the key financial performance indicators for the current system, including with a sheep milking unit added," he says.

"To do this, I designed a business plan with conversion costs and gross margins to generate some financial information that could be used as performance indicators in the event sheep milking was introduced."

Oldham also looked at what adding sheep milking to the farming system would do to the farm's environmental footprint.

"The sheep milk processing plant that was planned to open in the area later this year has met with delays, and with this factory not expected to open until next year - and no other factory nearby to collect sheep milk - the conversion didn't make sense right now.

"My analysis also found no strong financial advantage for going down the sheep milking route for our business, with the forecast profitability largely in line with that of our existing operation."

However, the family will continue to analyse the feasibility of adding sheep milking into the farming system.

"If we can find a way to increase the yield of milk per sheep, we may well go down this path at some stage in the future."

Darryl Oldham was presented with the Management Project Award at the 2022 Farm Managers Program Graduation dinner in Christchurch last month.

The event was attended by a selection of graduates from the most recent FMP course in 2021 as well as this year's crop of FMP participants and other agricultural industry leaders.

Accepting the award and the accompanying $2,000 cash prize from Rabobank NZ chief executive Todd Charteris, Oldham said the FMP was a great course with a top line up of speakers from all around the country.

"The course covered a wide array of topics that I hadn't had much exposure to before, like leadership, staff management and self-awareness," he says.

"The program also included some ideas and tools that have helped me to change my mind set when I'm confronted with a problem, and these have been really helpful over the last year when I've encountered challenges on-farm.

"In addition, I really enjoyed the interaction with other farmers on the program and learning more about their farming operations and the obstacles they're facing." Rabobank South Island regional manager Micheal Dunn, who acted as one of the judges for the Management Project award, said the projects were done so participants could put into practice the tools, theories and ideas introduced during the program and utilise these on the farming operations where they worked.

"Darrly looked outside the box at an option with the potential to add value to the overall farming business. All of the judging panel were impressed by the high level of detail and thoughtful analysis incorporated within his project, and it was clear to see he'd taken a lot away from his attendance at last year's program," he says.

"Ultimately, the partnership has decided not to proceed with the sheep milking opportunity right now, however, it's the journey that's valuable and the groundwork has now been done should the family decide to re-visit this opportunity in the future."

The annual Rabobank Farm Managers Program has been run since 2006 and offers farmers from across New Zealand and Australia an opportunity to develop and enhance their business management skills.

Previous years have seen farmers from both sides of the Tasman joining together on the same course, however, over the last two years, separate programs have been run in both New Zealand and Australia due to Covid-related travel restrictions.

Participants leave the course with new skills, techniques and a commercially-driven perspective on farm management. They also gain the ability to put systems and structures in place to manage growth.