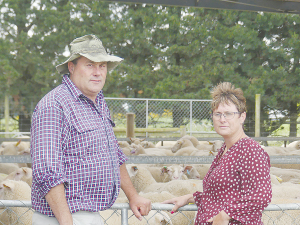 Matt and Tracey Jones with their milking flock on their farm at Kirwee, in Canterbury.

They have been milking sheep only since 2019 but are already selling their own cheeses under the Jones Family Farm brand and are about to add fresh bottled milk to the range.

They are also forging ahead with expansion plans. As processors, they already collect milk from five other sheep milk producers and hope one day to service the whole South Island.

Meanwhile, their Sabelle brand range of sheep milk-based skin and body care products has won a place among the finalists of this year's prestigious Champion Canterbury Awards.

Matt and Tracey's farm and small processing factory are near Kirwee, on the main road from Christchurch to the West Coast.

They began milking sheep only in August 2019, and only in February this year held an open day on the farm as a way of publicly introducing themselves to the industry.

Matt Jones, who is also the man behind converting the former Winchmore Research Station near Ashburton into an agriculture training institute in 2019, says dairy sheep are 50% to 70% better for the environment than "our bovine friends."

The February open day attracted about 300 people, many of them sheep and arable farmers looking for alternative opportunities or industry people wanting to just see what was going on, he says.

"And about a third were dairy farmers who were looking at alternatives because they are starting to get restricted in the way that they intensively farm their operations."

The Joneses run about 600 ewes on a 48ha milking platform with about another 300ha providing feed support.

They operate a hybrid system with pastures of predominantly lucerne, red clover, or a clover, plantains and chicory mix, plus a daily ration mix of lucerne silage with added grains and minerals.

The lambs go onto ad-lib milk from automatic feeders (which mix milk from powder on demand and serve it warm) until about 20 to 25 days, with muesli and lucerne silage also available to them.

Milking is currently twice a day through a herringbone shed with 12 sets of cups a side.

"We have in-line meters and monitor the ID tags, to measure performance every day, because this is sort of a pilot farm that we operate here," says Jones.

"Everything's always been fully recorded for the last 10 years, but it wasn't until February this year that we put our hand up and said to everybody what we were doing, on a public basis."

Jones is putting a lot of work into breeding "that South Island animal that can handle our environment."

He says New Zealand's milking sheep stock has come from a very small bse of East Friesians - just nine ewes and six rams that arrived in 1996.

But he has been importing embryos and semen from Europe to improve the stock.

He has used Lacaunes from Southern France - the breed most commonly used for roquefort cheese production - and has also turned to a breed from the Pyrenees called Manech tête rousse.

"That comes off the mountains, so it's a lot hardier. It's a little bit smaller and it milks extremely well.

"But the East Friesian is the engine room and we need to build an animal around that.

"So the Lacaune gives us some really nice udder conformation, good test placement, fast letdown during milking. But it is a soft animal, it's not born with much wool, has feet issues as an East Friesian does.

"So the Manech is starting to give us some hardiness and a bit of vigour in handling the different weather conditions and extremes that we have."

Jones says his flock is very young, made up of 40% to 45% hoggets, 40% second lactatin, and the rest mixed-age ewes. But the hoggets are already out-milking the old ewes.

Matt Jones now has animals through embryo importation whose dams have done 180MS and 1000l a lactation.

"That's the significant growth and potential that we've actually got as an industry, because we are starting from a really low base of genetics."

With another sheep-milking pioneer, Keith Neylon of Blue River Dairy, Southland, the Joneses are looking at setting up a farmer's co-op to help give others a start in the industry.

"The genetic base was very small. Our ability to really stretch those genetics and develop the animals is really high," says Jones.

"And New Zealand farmers are a really good at grass-feeding animals, driving production, and cost-effective farming."

Sheep milking set to take off

A new breed of milking sheep and a demonstration farm with a 64-bail internal rotary have set the ball rolling for the dairy sheep industry.