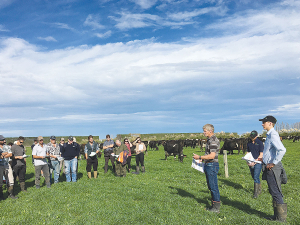 Farmer Phill Everest (third from right) addresses the field day on his farm.

Phill and Jos Everest farm 750 dairy cows with their son Paul and his partner Sarah, and they work together as a family to meet their environmental goals and stay ahead of regulations.

Phill and Jos are actively involved in DairyNZ's Meeting a Sustainable Future project, which shares knowledge among local farmers to reduce nitrogen loss.

Phill is a DairyNZ Climate Change Ambassador and says local farmers know they need to make changes for the future to protect the environment.

"We've always focused on learning how to do things better. We’ve got to learn fast to make changes and keep contributing to our local communities.”

The family’s changes include reducing nitrogen fertiliser by 35% – ahead of the national and regional deadlines. This resulted in a small reduction in milk production this season.

Phill says they learnt from the changes and next season will adjust their approach and focus on improving pasture growth to lift milk production.

“We developed an annual nitrogen application plan so we knew what our target application rates were each month to meet the new targets. We also used a coated urea product which reduces greenhouse gas and nitrogen losses,” says Phill.

Among other improvements, the Everests have installed a variable rate irrigation system on one pivot irrigator. This is very water efficient and allows water to be applied in different amounts across a paddock, reducing drainage and nutrient losses.

The farm team has carried out 22km of planting along drains and fence lines to improve water quality and provide shelter.

Plantain and chicory have been added to their pasture mix, and additional plantain and clover seed is applied with capital fertiliser dressing. These changes help reduce nitrogen loss.

Together with DairyNZ, the Everests hosted a field day in May on their farm near Ashburton, which 45 farmers attended.

Phill says reducing nitrogen losses further to meet environmental requirements will be a significant challenge for their family and other farmers.