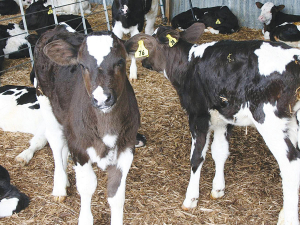 Chrystal claims that when a product is cheap, there is generally a reason.

"You get what you pay for," she says.

"Many milk replacers are produced using raw materials which were initially intended for human consumption but didn't make the grade and they are often less digestible than one would expect.

"Ultimately, this means less growth in your calves. And, more often than not, while the cost per bag is lower, the cost per calf is higher.

"Choosing a milk replacer which is specifically formulated to provide calves with the energy, amino acids, vitamins and minerals that they require for the very best start to life and which is backed by science and innovation should be your first consideration."

She also cautions farmers about only going by what's on the label.

Most milk replacers will specify the protein content on the bag. But Chrystal says that this doesn't tell you much about how much of that protein or fat the young animal can utilise for growth, and more isn't always better.

"The manufacturing process for many milk powders can damage the proteins present, making these less digestible - even though the protein content doesn't change. This is often the case for milk powders diverted from the more valuable human food market."

Careful selection of fat sources used in a milk replacer, combined with manufacturing technologies which increase fat digestibility in the young animal, are a much more important consideration than the fat level declared on the bag.

Chrystal recommends choosing a milk replacer which contains highly digestible fat sources like milk fat, palm fat and coconut oil and one where the fat is homogenised - small fat molecules are easily digestible.

She adds that not al calf milk replacer (CMR) powders are formulated the same or made from the same ingredients. In some cases, the same brand will even differ from batch to batch, which is not ideal for a young animal.

"The source of ingredients and the manufacturing processes for milk replacers both play significant roles in digestibility," she says.

"Digestibility is key; it ensures the animal gets the most out of the feed, providing them with the protein and energy they need to grow."

"Farmers pay good money for genetics, so why wouldn't they give those calves the very best start?  By this I mean quality colostrum, consistently good quality milk, good biosecurity and housing.

"With nutrition being an obvious investment think about the phrase 'you are what you eat'.

From twice a day feeding with a premium whey powder to adlib feeding with Sprayfo Delta energised calf milk and then Sprayfo Blue Premium.

Sprayfo milk replacers are made in the Netherlands Trouw Nutrition with high quality dairy proteins and vegetable fats, homogenised and spray-dried (a manufacturing process unique to Sprayfo).

Blakelock says she chose Sprayfo for the science behind it.

"I like the transparency. You know exactly how Sprayfo is made and what's in it."

Having done the tall-end of one season and then a full season with Sprayfo, she is well pleased with the performance of her calves and the cost-effectiveness of the product.

"With Sprayfo, we reared better calves with fewer losses," she says.

High quality milk replacers are crucial if you are preparing to rear lambs or goat kids in the upcoming season, according to Milligans Feeds.