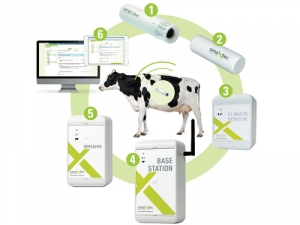 If information is power, any technology giving farmers a real-time insight into an animal's physiology must be worth a closer look.

The Austrian-made Smaxtec (say 'smack-tech') system, from Smart Farm Data Ltd (SFD), Hamilton, looks at data in real time. In an industry-first it allows wireless monitoring of ruminal pH and temperature, and tracks and monitors changes in activity levels.

There is a choice of two bolus based sensors, administered orally to ultimately sit in the reticulum of the animal.

The first sensor measures rumen temperature and activity, remaining active for four years; this would typically be used for 95% of the herd.

A second alternative bolus does the same thing, plus it will monitor rumen pH levels for about 150 days; it would be used to sample, say, 5% of the herd. This pH optioned sensor would show the farmer any fermentation disorders, with the ultimate aim of increasing feed efficiency and uptake, plus options for ration modification.

A third option has a climate sensor which monitors environmental factors such as temperature and humidity.

The device collects data every 10 minutes 24/7, then transmits it to a base station when the animal passes within 10-15m of the device, which might typically sit in the milking shed.

The range of the devices can be extended by repeater stations in the shed or around feed pad areas. If cows don't come into range of base or repeater stations, for example during the winter period, information is held for up to 50 days in the sensor before upload.

What is the data going to tell us?

Temperature monitoring might indicate the onset of disease or infection or perhaps the beginnings of sub-clinical mastitis. When combined with a lack of activity, a temperature drop is also a good indicator of the onset of calving; this might be a drop of only 1 deg C over six hours, prompting a closer watch on animals and early intervention if required. A further benefit is early signs of heat stress in cows during summer, as higher temperatures send cows more often to water troughs.

Cleverly, the system can send messages to a smart device and inform the farmer about a particular cow's health status and suggest areas for further inspection and action.

Developing its NZ and Australian market, SFD has spent a lot of time developing algorithms that relate to the physiology and behaviour of cows in both countries.

Says Davis Hayman, managing director, "This system can provide precise data in a timely manner for early intervention and correction. Farmers who have taken the step toward robotic milking will see the benefits of animal welfare as they already rely on technology to harvest milk.

"The system will also keep a close eye on two to three year old animals which appear to be the greatest casualties in intensive milking systems. Getting this problem under control has the potential to reduce replacement costs by up to 15%"."

Costing the system at about $165 per animal, the company calculates payback at about 3 to 1; typical savings over the four-year working life of the device would be about $500, typically helping to identify temperature increases as precursors to acidosis, improving heat detection and mating, and advising of the onset of calving. This latter benefit makes the unit particularly useful for pedigree dairy and beef breeders, or it might have a place with organic farmers who would get early warning of fevers and be able to treat accordingly.