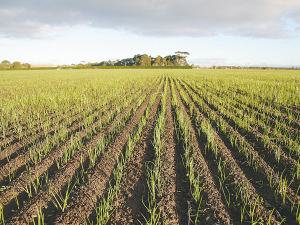 For new pasture you can be proud of - even if it feels too dry to think about it right now - consider sowing seed before it rains, instead of waiting for the autumn weather to smile on you.

"It can also grow more feed per hectare than seed sown later, and will probably persist longer too, giving you a better result all round."

Plus, you'll beat the rush for contractors when the rain does come, he says. "We've been asked so many times if it's okay to sow seed in the dry, we did a trial to confirm the answer."

The earliest sowing had it the hardest - the soil reached over 49 degrees C at seed depth (2cm), with no rain for 43 days.

Even so, this February-sown seed went on to grow 2 tonnes of dry matter per hectare more than seed sown post-rain in April, and the endophyte was fine, Blair says.

Ryegrass seed sown after 1 March and before the rain comes is poised for growth as soon as conditions are right.

If seed is still in the bag when the weather breaks, it can't grow. By then everyone else wants to do the same thing, so contractors are flat out and delays are inevitable especially the way things are now.

Because it starts growing as soon as it has enough moisture, seed sown early becomes new pasture that is ready for its first grazing sooner than if you wait and sow after the rain.

Why does this matter?

"That first grazing has a massive impact on your pasture establishment," Blair says. "It helps the young ryegrass plants grow denser and stronger before winter, when wet soils and heavy cows can damage pasture. And it gets the clover off to a good start."

An added bonus - clover seed likes early sowing, too, because the soil is warmer.

The benefits of sowing early don't stop in the paddock. If this technique suits your farm and your soils, it will also help you get organised ahead of time.

That means no rushing around at the last minute trying to get hold of seed, and a lot more peace of mind knowing you're as ready as you can be for one of the most important jobs of autumn.

A new tool that enables farmers to assess the fertility of their soils by looking closely at the pasture quality, vigour and clover content has recently been released.

Contemplating what this year’s dry will mean for your feed supply in late winter and early spring?

Every blade of grass can help reduce rising costs

Every blade of grass holds the power to dilute rising costs

First previewed by Krone at Agritechnica 2019, the company has release further details of its folding front mower cutter-bar.

Driving improved efficiency, many farmers and contractors are committing to machinery that improves output, preserves quality and ultimately reduces costs.