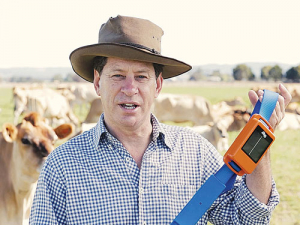 Ian Reilly, chief executive of Agersens, with a prototype of the company’s GPS and wireless-connected collars.

The idea of virtual fencing has been around for 20 years, but AgResearch believes its time has come and will soon start testing an Australian product.

Farm systems scientist Warren King, of AgResearch Ruakura, says it has been watching the technology for years and now believes the eShepherd product from Melbourne company Agersens is “the real deal”.

New Zealand’s Gallagher Group is a lead investor in Agersens, with marketing manager Mark Harris on the board.

The system uses solar-powered collars on the livestock, GPS-enabled and connected by wireless to a farm’s base station.

Through a smartphone or tablet app the farmer can map and automate the movement of virtual fences to control stock movement and grazing. The collars train animals to keep away from the virtual fences with audio cues backed up by mild electric shocks.

AgResearch and Agersens have agreed to a test of the system under NZ conditions.

King says what sets this system apart is the CSIRO animal behaviour research which Agersens has licensed and is underpinning the software.

“We can talk about the hardware, the technology, the GPS collars, the solar chargers, the speaker, the comms – all that sort of stuff,” King told Rural News. “But really, none of that by itself is spectacularly innovative.

Getting it all in a package like that could be done by a number of suppliers.”

He says what sets Agersens out from anyone else with this technology is the IP (intellectual property) work done by CSIRO over the last 10 years or so, that controls the way individual animals are able to be trained, almost, with these collars.

“It’s all too easy to get a hardware solution out there, but without a really good understanding of animal behaviour it’s a long way from being market-ready.

“What do you do, for example, with an animal that is heading towards a barrier it clearly can’t see? And what do you do then if that animal chooses to ignore those signals and goes through that barrier?” King asks.

“How then do you interact with that animal in a way that is compatible with best practice animal welfare but also with a really intimate understanding of animal behaviour?”

Agersens founder and chief executive Ian Reilly calls it a tool to automate grazing, both on Australia’s large stations with few physical fences and, on a smaller scale, with the likes of break-grazing of fodder by dairy cattle.

He says fencing off waterways and environmentally sensitive areas would be important for NZ dairy farmers, to maintain their “social licence” to farm.

“We expect that on installation you put all the collars on, install the base station and the app on your iPad, then you would map the farm, put in all the fixed fences and watering points and laneways and things that you might have,” he explains.

“So in a mock-up you’d literally drag your mob of animals that you’ve assigned to one paddock and you drag’n’drop them into the next grazing paddock.”

Reilly says dairy farmers would be able to use it to improve pasture utilisation and maximise their milk production. With motion sensors also contained in the collars, they would also provide basic health monitoring and early warning of problems.

Agersens’ system has attracted interest around the world and King says AgResearch hopes to get hold of some pre-production units soon, before deciding its priorities in testing it in the NZ environment.

“Some of the early thinking clearly is on dairy systems and break-feeding of crops, where you are able potentially to provide a much better match between animal allowance and animal production – control that much more finely tuned than we are currently capable of doing and with far less labour.”

Melbourne agritech company Agersens says it has raised $14.75 million capital including cash from existing investors such as NZ’s Gallagher Group.