Efficient water use on a drought-prone farm 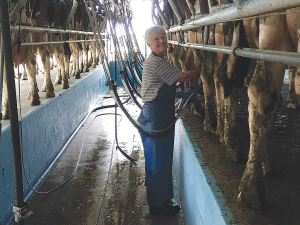 Michelle Alexander in the milk shed.

In a region increasingly prone to drought, being able to reduce the amount of water being used in your dairy shed by 50% is a massive win.

For Hukerenui Holstein Friesian breeders Kevin and Michelle Alexander that win came down to measuring good data, a commitment to finding a better way to manage water on their farm and using better tools and methods, including a hose nozzle that uses a significantly less water than a normal hose.

The couple have been on their 178 hectare farm about 20km north of Whangarei for the past 20 years. They milk around 350 mainly Holstein Friesian cows, which in a good year return about 1,100kgMS/hectare.

The season is looking almost as challenging.

The couple never ran out of farm water though, where some other farmers in their district had to ship water in.

Kevin says he remembers his grandparents telling him about the drought that hit the region in 1945. One of the lessons was, when looking for a farm, always look for on with a gravel bottom stream as they never run dry in Northland.

"We brought in a small amount of feed, dried the herd off early and then concentrated on resowing resilient pasture species to take advantage of our growing seasons."

Kevin says it was also a good opportunity to reboot the pasture species on their farm.

They say it's been hard work.

The couple have continually tried to gear themselves up to where the future is heading. In the past they took part in an effluent reduction project which led to them reducing water use in their farm cow shed by 50%.

The project was run in conjunction with the Northland Regional Council and as part of the project water meters were fitted to key water outlets in their cow shed, from washing down to their backing gates and vacuum pumps.

Using the water meter data, they worked out using simple ideas, how to make the most efficient use of their water in their shed. For example, they moved from 42mm hoses to 32mm hoses and made sure staff were using correct procedures when hosing down the shed.

They also discovered they were pushing their water driven backing gates far harder than they were designed to work.

“We reduced the volume of water driving the backing gates significantly, so the gates travelled at their designed speeds,” says Kevin.

“We went from using 23 cubic metres a day to 12, excluding dairy hygiene and stock water.”

We improved the efficiency of dealing with our effluent, albeit it was far more concentrated, so we have to be conscious of how we are spreading that over our effluent field, which covers half the dairy farm. Kevin says it also meant they reduced their hours and input into managing their system.

The couple believe the next three years are going to be very interesting in New Zealand from a farming system perspective.

“Over the next three years, with new legislative requirements coming at us, it’s going to be a bit of fun working it all out. I think all the answers are there we just have to actually look at it smarter. Look at the science and technology that’s available to us and look at changing farming patterns that will help us meet our requirements.”

On their farm they are looking at maximising fodder growth using the advantages within the Northland climate.

"The Holstein Friesian is by far the largest dairy population in the world and because of that, the potential for the rate of change with the genetics is immense. The trick is finding the traits we want and having them made available to us," says Kevin.

We have a clear picture in mind of what we are trying to achieve with our herd.