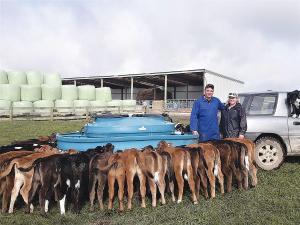 The company says “hundreds of thousands of calves” have been bred from its LowN Sires, launched in 2016. In the 2018 season at least 25% of CRV’s orders were for LowN sires, it says.

The LowN progeny excrete less nitrogen (N) in their urine, the company says. Its bulls produce daughters with lower milk urea nitrogen (MUN), and the result is a reduction in N leaching.

Steve and Paula Holdem last season inseminated their 700 cows using semen from CRV’s LowN Sires. The Holdems own and farm 300ha in Mamaku, near Rotorua.

“We farm in the Rotorua lake catchment and our regional council requires all dairy farms in the catchment to lower N leaching by an average of 35% by the year 2032,” said Steve.

“We’re trying to build a herd that suits this farm, and works with the environment and this catchment.

“Our approach has always been to look at all the different tools, eg feeding plantain, reducing stock numbers and grazing our cows off, which can help mitigate our farming operation’s effects on the environment. Using LowN Sires is another way we can do this.

“There is a reduction in economic farm surplus (EFS) when reducing N leaching, but we could potentially reach our required target and have no effect on EFS simply by using the LowN sires.”

“But it’s important for the future of our business to be proactive and take a long term view.”

Steve says that as sharemilkers they were chasing breeding worth (BW) for many years.

“[But] times are changing and there is more to consider now than just BW. The longevity of our herd is just as important and focusing on maximizing each cow’s days in milk.

“Dairy farming today means achieving these goals while also making sure we tick all the boxes on the environment and animal welfare front. Genetics play a big part in that.”