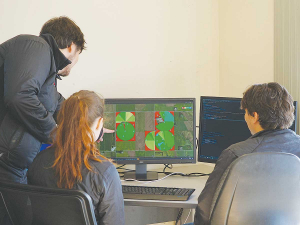 Lindsay, which produces the Zimmatic brand of pivot irrigators, has introduced the concept of the world’s first ‘smart pivot’ to its markets around the globe.

The game-changing irrigation prototype diagnoses its own operating faults and can launch a drone to manage crops at leaf level. It uses machine learning and multiple sensors and cameras to operate.

More than 60 NZ farmers tuned into two recent webinars, where they were shown the smart pivot’s user interface and asked for feedback on its functionality and how it could be improved.

“The smart pivot is the ultimate example of Lindsay’s commitment to customer-led innovation. It is the culmination of more than a decade of listening to all the things farmers wished their pivot could do.

“The two webinars were an extension of this process and an opportunity for us to use modern day technology to connect with as many farmers as possible, and help us refine the smart pivot’s design.”

Lindsay’s New Zealand team, based in Feilding, developed the software for the prototype that builds on the existing FieldNET platform.

The smart pivot combines high resolution aerial and satellite imagery, along with cameras and sensors, to detect crop growth stages, optimise irrigation and detect disease. The system can even launch a drone to capture in detail any crop anomalies, using thermal imaging to detect the issue and offer a solution.

The system will let you know if a tyre is going flat before it happens, or if a gearbox is showing signs of wear. It can also detect ponding, blocked sprinklers or sprinklers that are not working properly.

You can even programme it to notify a dealer to send out a service technician.

“Farmers who tuned into the webinars were keen to see how much the smart pivot could potentially do for them, saving them both the time and energy when it comes to best-managing their pivots,” says Bradbury.

“There was particular interest in the smart pivot’s ability to send automated alerts when it was not running efficiently or outside of the recommended operating parameters. Farmers also wanted to learn more about how its technology could translate into better environmental compliance.

“We know farmers are conscious of both their business and environmental efficiency, and recognise the two are innately intertwined.

“The smart pivot can help them see how individual management decisions made throughout the season have impacted the efficiency of their operation.

“It can also help them understand their input costs, like water use, and how that relates to yield profitability.”

Bradbury says work on the smart pivot’s design is on-going and it will be some time before farmers can get their hands on this revolutionary new piece of ‘kit’.

“We are excited about the appetite there is from farmers this type of technology, but we need to make sure we get it right.

“This concept is still very much in a development phase and there is a lot more refinement and testing we need to do before we can launch it to market.

“We recognise the value farmers can add so we will continue to consult with them and keep and keep them updated on our progress.”