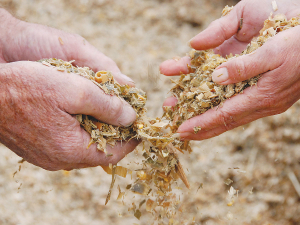 Maize silage is a maize crop cut and ensiled in a stack or bunker; commonly used as a supplement to pasture in situations where cows would otherwise be underfed.

Maize silage is a high quality forage supplement, according to DairyNZ.

Maize silage is a useful supplement for filling genuine feed deficits, but needs to be well managed to reduce costs and wastage, it says.

Why is maize ensiled?

Maize silage is full of soluble carbohydrates which while being a great food for cows, is also loved by spoilage bugs, such as yeasts and mould. The aim of the ensiling process is to get air out of the stack and keep it out until maize silage is ready to be fed.

Consider whether to use a bun (stack) or a bunker. Buns can be located around the farm and therefore more flexible, whereas bunkers are initially more expensive but have higher compaction rate and therefore less wastage.

Stack dimensions, the aim is to build a stack so that when being fed out, as little maize as possible is exposed to air. Consider quantity of maize, how many animals you are feeding and what inoculant you are using. Ideally it should take no more than three days to feed across the stack face, taking about half a metre each feed.

Cover immediately after the contractor has finished rolling the maize. Seal around the base of the stack with soil, sand or lime and place tyres to completely cover stack.

Keeping the air out

Ensure the face is left tight daily, with no loose material at the base of the stack.

A wide mouth shovel and a broom will help prevent this. You do not need to drop the cover down over the face each day. If birds are a problem can use bird netting or shade cloth.

Closing a stack down

Use the front end loader to remove any loose material from the front of the stack, trim up the face using an old chainsaw and spray a saturated salt solution over the stack face, drop the silage cover back down the face, reseal the base with soil and place tyres against the covered face.