FMD outbreak ‘only a matter of time’ 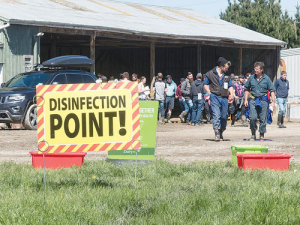 A foot and mouth disease (FMD) outbreak in New Zealand is only a matter of time, says DairyNZ biosecurity readiness and response manager Chris Morley.

“We all hear about foot and mouth disease, and we assume it’ll never happen. I can guarantee that it will happen. It’s just a matter of time,” Morley told the recent Lincoln University Dairy Farm spring focus day.

With the Mycoplasma bovis outbreak uppermost in dairy farmers’ concerns, onfarm biosecurity was a major topic of the day’s programme.

Morley said increasing number of passengers are coming to NZ from increasingly higher-risk places and the dairy business is getting more complex.

“Everything’s starting to stack up against us; MPI cannot stop everything at the border,” he said.

“What does that mean at the farm level? Do we carry on as we have done for the last 50 -100 years or do we need some changes?”

An MPI assessment two years ago showed that just a small-medium FMD outbreak would take $16 billion off GDP, with borders closed and interest rates up.

“That’s why it’s important to look at onfarm biosecurity because if it does come here, there are things we can do day by day to minimise the impact in terms of how far it can get before we find it and how quickly we can stop it moving around.”

Both Morley and the LUDF veterinarian Chris Norton had worked on the big FMD outbreak in Cumbria, northern England, in 2001. Norton told the focus day he went there as part of a NZ veterinary contingent.

“I wiped out hundreds of thousands of cows. I took out entire valleys.”

Norton said FMD is by far the biggest threat to New Zealand’s biosecurity. “It would cripple us.”

Norton said migrant workers returning to New Zealand from visiting relatives back home are one of the biggest risks and he suggested farmers impose a stand-down period.

“They could have been through Asia in the meantime. Those places are full of bugs and exotic diseases that we don’t want on our farms and yet we let these guys back on our farms within literally hours of getting off the plane. I see that as a significant risk to my farm.”

Norton conceded it was difficult when migrants were on a roster and were needed back on the job.

He said that when he worked on the 2001 outbreak he was culling cows in Cumbria one Monday and delivering calves in Taranaki the following Monday. But he had soaked himself in a bathtub of Virkon disinfectant at Heathrow and again when he got to NZ.

“It’s paranoia, I know, but I’d been on the front line. I’d seen the effects of an outbreak so the last thing I wanted to do was introduce the virus into NZ.”

Morley added that with the ease of travel now it was quite practical for a dairy farmer to be on a farm milking cows in Chile or China and be back milking cows in NZ within 24 hours.

DairyNZ imposes an eight-day standdown on its staff if they have been working overseas, or five days if they have not been in contact with animals, before going onto a farm here.

“I wouldn’t be letting anybody come off a plane and come to a farm in NZ from South East Asia, from Africa and from parts of China, who have come from livestock and... straight into your milking shed or your calf shed. That’s absolutely nuts and irresponsible,” he said.

Visitor management, including contractors and service workers, would be the number-one biosecurity issue for farmers running a closed herd.

“But if you’re buying in dairy cows or heifers or bulls, then that’s right up there because most bugs will travel with the animal. So animal movements are number-one,” said Morley.

“If they’re going away grazing, or using a contract rearer doing that grazing and growing, they’re mixing. Who are they mixing with, where have they come from?”

However, it is not just animal diseases to be aware of but also insect pests and pasture weeds, including velvetleaf -- “a disease I’d never heard of”.

“How come [we got the] supposedly worst weed in the world in fodder beet we’ve now imported into the country accidentally in seed and planted it in over 200 farms, and no-one was looking for it? I find that staggering.”

Velvetleaf came in with fodder beet seed grown in Italy and certified in Holland and Denmark.

“The people signing the certificates didn’t know we didn’t have velvetleaf. They also didn’t know that velvetleaf was growing in Italy because they weren’t interested quite honestly, because velvetleaf’s all over the place in Europe,” said Morley.

“Our own seed merchants were aware there was a risk and they never flagged that,” he said.

“If you see risk, it’s behoven on us to actually flag it.”