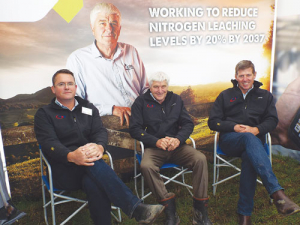 Five years of research has led to CRV Ambreed discovering that selective breeding will help reduce urinary nitrogen leaching on NZ farms by 20% within 20 years.

The research looked at the connection between milk urea nitrogen (MUN) and nitrogen in urine. The link between MUN and lower nitrogen output is acknowledged in international research, but this is thought to be the first time the specific trait has been bred for and promoted.

Phil Beatson, R&D manager for CRV Ambreed, says the research looked at tackling urinary nitrogen (UN), considering that nitrogen taken in by cows in their feed is converted into milk protein, growth, dung, gases and urine.

Since 2012 the research has looked at the MUN concentration in 650,000 milk samples and analysed them to understand what is inherited, and to create a MUN value for all animals.

Today the company has identified about 25 high quality and top-performing CRV Ambreed bulls with the desirable genetic makeup for low levels of MUN, while also offering traditional production traits. It will sell semen from bulls whose daughters will have reduced concentration of MUN under the LowN Sires brand.

Hundreds of thousands of straws of semen are now available from the LowN Sires team, Beatson says, “exciting news for farmers -- the potential to help meet their environmental compliance through breeding.”

Cows bred for lower levels of MUN are expected to excrete less nitrogen in their urine and so reduce the amount of nitrogen leached from grazed pasture.

CRV Ambreed managing director Angus Haslett points ahead to ‘greener’ cows -- improved offspring to be born in 2018 and lactating in 2020. Mitigating nitrogen leaching will save a lot of money and help the environment, he says.

“The beauty of the genetic approach is it adds to other strategies a farmer might be using to reduce nitrogen leaching. CRV Ambreed offers a long-term solution that fits within the standard AI mating programme.

“Genetics can produce great gains for farmers, and many farmers already choose our bulls to breed certain traits in their cows; this is another step to finding solutions in genetics rather than products.”

DairyNZ applauds the genetics news. Its strategy and investment leader for productivity, Dr Bruce Thorrold, says “if the planned science proves the link between breeding for MUN and urinary nitrogen output, this would give farmers in nitrogen-limited regions such as Canterbury more options to reduce nitrogen leaching without going away from a pasture-based system”.

CRV Ambreed has begun briefing regional councils about the work.