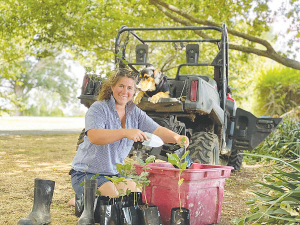 Under the watchful eye of Jack, Sophia Hunt prepares oak seedlings for planting on the farm that's been in her family for more than 100 years.

The Hunts are taking the long view on shade planting and sustainability.

“Grandpa was against it at the time; grandma claims she suggested it,” says Sophia Hunt, whose grandparents were the original owners of Orakau Dairy in Te Awamutu, Waikato.

What grandma and grandpa were disputing was Rose and Vernon shutting up a 1.5ha paddock with some mature acacias about 25 years ago, allowing the self-seeded acacias to grow, instead of being nibbled off each time cows grazed the paddock.

The farm had a few stands of mature macrocarpas at the time, planted for timber and used by cows for shade and shelter. But the macrocarpas needed to be milled, and there was concern about the trees causing slips.

So, Rose and Vernon decided to close the acacia paddock and create a new shade and shelter area.

“The paddock was closed to stock for about seven years,” says Rose. “We’d intended to shut it for only five years, but the young trees needed a little longer to establish.”

By shutting the paddock, the seedlings were able to grow into tall trees, creating a shady glade.

Rose and Vernon also planted pin oaks, meaning there are now plenty of trees along races, including ongoing new plantings of pin oaks, kahikatea, blue gum and walnut. It’s fitting that trees are so prominent in their approach because the name of the area, Orakau, means ‘place of trees’.

“But you can’t do it all at once,” says Rose, “so we’re fortunate this farm has been in the family this long. And even if we don’t reap the benefits, the next generation will.”

And Sophia is continuing the tradition. “I buy a bunch of trees and think, ‘Where am I going to plant them?’ We’re lucky to have soil that doesn’t allow trees to blow over when it’s windy.

“We still need more trees, but I’m mindful of gateways, and getting in and out, as well as where roots could potentially block drains.”

Sophia’s latest tree endeavour is to bag up little seedlings growing under the mature oaks, and she’ll plant them elsewhere on the farm in a couple of years’ time. She hopes starting with seedlings that haven’t had the tap root cut, and protecting them as they grow, will produce better shade trees than purchasing large saplings.

These are just some of the many initiatives taken at Orakau to keep their cows cool as part of their commitment to animal care on-farm.

“Our motivation is animal wellbeing for the most part,” says Sophia. “We use the acacias on hot days for the second herd because it’s on their way to the dairy.

“We try to keep the cows close to the shed during the day and use the far paddocks at night, so cows aren’t using up too much energy during the hotter time of the day.

“It’s uncomfortable for us to see them panting. The flow-on effects of planting trees are happier cows that move a little easier, as they can manage the heat.”

The Hunts allow their cows to move at a ‘glacial pace’ and to take as long as they need drinking before leaving the paddock.

There is a trough at the exit from the dairy, and four big troughs on the races, so cows typically have access to at least two troughs on the way to and from milking. This ensures the animals’ water intake is optimum.

The Hunts describe their acacia glade as a “triple whammy”: it provides shade, feeds the bees, and fixes nitrogen

“We all know cows can bully each other in the paddock, so this gives them all a chance to drink,” says Sophia.

All troughs are cleaned every two years. There have been sprinklers over the yard for 27 years to mitigate heat. “They are very effective. I’m not sure if all the cows like them, but we leave enough space so they can avoid the sprinklers if they want to,” says Sophia.

Sophia would like to make changes to the milking routine in the summer, but for staffing reasons, hasn’t changed the routine yet.

“I would like to try milking earlier in the morning, with the second milking at midday, and put a shade cloth on the feed pad and the back of the yard. I’m very aware of the heat radiating from the concrete onto the cows.”

Sophia's tips for other farmers wanting to keep their cows comfortable in summer:

Having a skilled and motivated farm team is the foundation of a successful dairy farm.

When Fonterra’s milk tankers do their rounds, the northern-most farm they call on – in all New Zealand – is Len and Pearl Crewther’s in the Far North.

Should farm gypsies rethink before taking the next step?

For many in the dairy industry June 1 means one thing – time to move. As the new season starts, thousands of sharemilkers pack their cows into stock trucks and move equipment and families to new farms.

Farmers don't want weaker environmental policies. Ten years ago we were fair game for the ‘dirty dairying’ remarks by Fish & Game, today not so much.

Housing cows not the only way to increase dairy production

The recent visit by Professor Aalt Dijkhuizen, president of Topsector Agri and Food in the Netherlands, raised some interesting points about how New Zealand dairy farmers can learn from their Dutch counterparts.