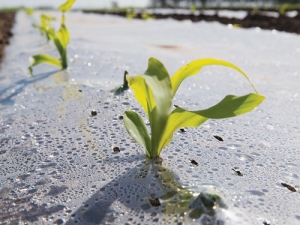 A greenhouse effect keeps the young maize seedlings in a warm and humid environment.

One of the biggest recent advances in maize agronomy has been the growing of maize crops under film using the SAMCO System.

This allows the production of higher yielding maize crops in cooler regions and can even allow the establishment of successful crops in areas previously considered marginal.

The SAMCO System 3-in-1 maize-planting machine was awarded the Innovation Award for International Distinction at the 2014 National Fieldays. Developed in Ireland, it plants the maize seed, sprays the soil with a pre-emergent herbicide and covers the planter rows with a degradable film in a single pass.

The degradable and breathable film creates a greenhouse effect by keeping the young maize seedlings in a warm and humid environment for four-six weeks. During this time, plants are protected from late frosts and adverse weather and they grow faster because there is more heat. The film also helps to conserve soil moisture.

When the maize plant touches the film, the root system develops more rapidly and this helps to sustain the plant in the later growth stages. Eventually the plant breaks through the film and is on its way to producing a high-yielding crop. The SAMCO film itself is naturally broken down by warm temperatures and ultraviolet light, and the residue is eaten by soil microorganisms, meaning eventually it completely disappears.

I’ve observed the SAMCO System in various regions over the past growing season. It offers a number of advantages.

In traditional maize growing areas crops can be planted up to four weeks earlier, allowing earlier harvest and subsequent establishment of pasture or a winter crop. Alternatively growers can plan a longer maturity maize hybrid and achieve higher drymatter yields.

In cooler or higher altitude areas SAMCO offers the opportunity to grow crops in areas previously considered too cold. It also protects the young plants from late season frosts for four-six weeks.

Research overseas and locally shows a number of factors that help get the best results out of the SAMCO System. These include:

For further information on growing maize under the SAMCO System, call 0800 746 633 or speak to your local Pioneer representative.

• Ian Williams is  a Pioneer forage specialist. Contact him at This email address is being protected from spambots. You need JavaScript enabled to view it.